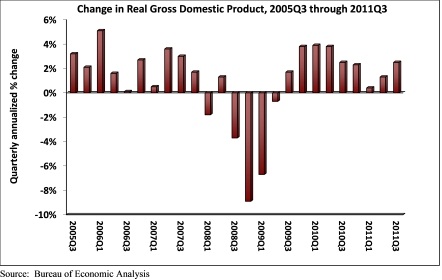 “Today’s report shows that a growing share of American corporations are willing to spend money to spur top-line and bottom-line expansion,” Basu said. “However, this does not signify that the nonresidential construction industry is set to boom.

“Public sector support for construction services is likely to be flat at best, and job growth remains halted and lending disciplined,” said Basu. “But the overall economic outlook for the nonresidential construction industry has improved materially over the past several weeks.

“Eventually, the investment in equipment software and structures will trend late into expanded hiring. Capital and labor go together and what the United States is now experiencing is acceleration in capital formation,” said Basu.

“That, in turn, will help trigger more demand for construction services, whether in the form of office buildings, apartments, or shopping centers. In short, the improved outlook for the broader economy in 2012 signals more recovery for construction activities in 2013 than were contemplated just a few weeks earlier,” Basu said.