Interesting issues are getting some serious media attention. The National Infrastructure Bank (NIB) is one and revising some regulations to better meet today’s needs is another. Too often regulations, existing legislation and out-of-date rules cause more problems than the lack of funds.

The creation of a National Infrastructure Bank was one of the promises made during President Obama’s campaign.

President Obama called for the creation of a National Infrastructure Bank in his budget released on Thursday, saying it would “expand and enhance existing federal infrastructure investments.”

“The mission of this entity will be to not only provide direct federal investment but also to help foster coordination through state, municipal and private co-investment in our nation’s most challenging infrastructure needs,” according to budget documents.

The budget, which must be approved by Congress, requests $5 billion for the bank in fiscal year 2010 which starts October 1, and anticipates that it will receive $25.2 billion from then through 2019.

For more than a year Congress has mulled creating what many have called a “Federal Reserve of Infrastructure,” which would use seed money from the federal government to establish an independent board for giving capital project grants to state and local governments.

When meeting with U.S. governors in December before he took office, Obama said the bank would be a top priority. During his campaign, he said an independent bank should receive $60 billion over 10 years from the federal government.

During the campaign, Barack Obama and Joe Biden said that they “believe that it is critically important for the United States to rebuild its national transportation infrastructure – its highways, bridges, roads, ports, air, and train systems – to strengthen user safety, bolster our long-term competitiveness and ensure our economy continues to grow.

How good an Infrastructure Bank will be depends entirely on how well it is managed and whether or not it becomes one more target for lobbyists, earmarks, or a place from which political favors can be extracted.

We need to address the problem of outdated, failing infrastructure. And money is the only thing that can fix what ails it. The more money we pour into it, the better the fix. But, sometimes money alone won’t do the trick. Some of our outdated legislation may be a bigger problem than funding.

President Obama’s plan to inject billions of dollars into infrastructure projects is welcome news for the world of agriculture, transportation industry experts said.

But the government must also pass targeted legislation to iron out the sometimes outdated policies that slow movement and increase the cost of raw materials flowing into and out of crop producing areas of the world’s biggest grain exporter, they said.

U.S. farm exports totaled a record $115.5 billion in 2008. Commodities move from farms located mostly in the interior of the country to domestic markets and export terminals via truck, rail and river barge. 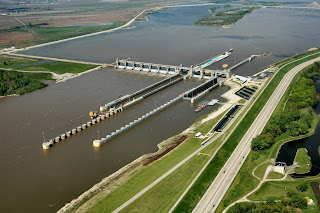 “We’re excited about the new administration, but this is going to be a mammoth challenge,” said Paul Rohde, vice president at Waterways Council, Inc., an advocacy group that works to sustain and improve the U.S. system of navigable rivers.

“The way we build these locks, the cost of overruns, our country is hamstrung by the process,” he said on the sidelines of the 2009 Commodity Classic grain industry
convention.

“I don’t know that it will happen in four years, but at least the trend line is changing,” he said.

In his budget proposal laid out this week, President Obama requested $5 billion to create a National Infrastructure Bank in fiscal year 2010, which starts October 1, saying it would expand and enhance existing federal infrastructure investments.

The transportation industry says that necessary repairs to aging roads, bridges, and river locks and dams have often been neglected until it is too late.

“The whole river works as a system. If just one lock goes down, there’s a ripple effect and all of a sudden the rail rates go up,” Rohde said.

Rail infrastructure has not been neglected as severely as U.S. roads, bridges and river locks because of private investment, but limited competition and a lack of government regulation of the industry has sometimes elevated shipping costs.

Businesses that transport grain and other goods via rail, represented by Jennifer Owen of the group Consumers United for Rail Equity, argue that railroads operate nearly as a monopoly but are not regulated by anti-trust laws as they should be.

The rail industry has consolidated from about 40 large railroads in 1980 to just 4 major players today, she stressed.

Efficiency in the trucking industry has been hampered by rigid regulation that should be updated, some in the industry believe. When you consider the fact that “rules of the road” can and do change from state to state.

“Truckers are limited to the hours they work and that’s for all of our safety,” said Russell Laird, executive director of the American Trucking Associations (ATA).

“But during the planting and harvesting seasons, while safety is still important, it’s really hard to get the job done without exemptions,” he said, citing proposed revisions to the number of hours a trucker must rest between shifts during busy periods.

Increasing the number of axles on a truck and spacing them out differently can increase the amount of material a truck can haul without undue wear on roads, he said.

Maybe it’s time some listened to the trucking industry and paid attention to some of the legitimate complaints they have. While we are deeply engaged in reinvesting in and rebuilding our infrastructure we should also be busy updating the other things that keep us from being globally competitive.