But, Backlog Is Up 10.9 Percent From One Year Ago

Associated Builders and Contractors (ABC) today released its Construction Backlog Indicator (CBI) for the fourth quarter of 2011. CBI declined 3.2 percent from the previous quarter from 8.1 months to 7.8 months, but is still up 10.9 percent compared to the fourth quarter of 2010. CBI is a forward-looking economic indicator that measures the amount of nonresidential construction work under contract to be completed in the future.

“Overall, the latest CBI numbers indicate a degree of stalling in the recovery of the nation’s nonresidential construction industry, likely due to a combination of the soft patch that developed in the broader economy early last year, a number of seasonal factors and the winding down of federal stimulus projects,” said ABC Chief Economist Anirban Basu. “But the good news is that given the recent acceleration in economic and employment growth, CBI is positioned to rebound more forcefully during the quarters ahead. 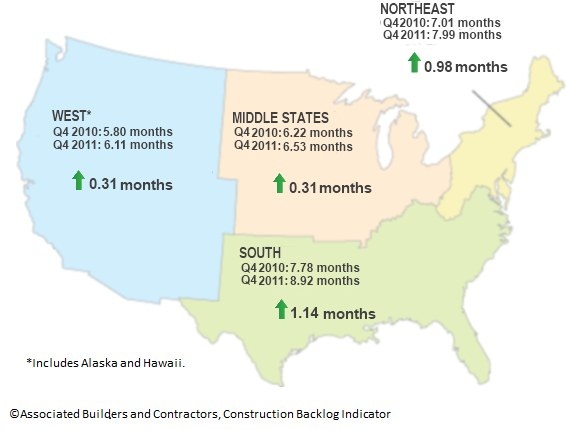 “The South appears to be the region most positively impacted by rebounding nonresidential construction, largely due to its central importance to the nation’s energy industry,” Basu said. “The West continues to deal with many issues, including the impact of weak residential real estate markets and stressed state fiscal conditions, both of which impact the vitality of broader regional economies.”

“The biggest surprise in the data is the lack of momentum in construction backlog associated with the heavy industrial category,” said Basu. “Manufacturing capacity utilization, or to what extent a nation uses its productive capacity, stood at just 71.4 percent during the third quarter of 2011, down from a typical historic level of more than 80 percent. This implies capacity utilization must rise a bit more before the industry experiences a significant increase in construction backlog.”

“The most important finding in this quarter’s report is the growing construction activity taking place among smaller firms,” Basu said. “Early in the recovery, the lion’s share of construction work seemed to favor firms with annual revenues in excess of $50 million. This had much to do with federal infrastructure spending. As the economic recovery has broadened to encompass more construction segments, work has steadily spread to smaller firms – a trend that is likely to continue.”