If it does will it make a difference?

The American Road and Transportation Builders Association is working overtime to develop information and materials that can be used to guide the committees and congressional overseeing the reauthorization program and has taken a leadership role in informing the  industry and public as well.

Mark Holan, editorial director, ARTBA reports,ARTBA’s “Project 2019 Reauthorization Task Force,” comprised of 26 volunteer leaders from all eight-membership divisions, developed the industry’s legislative blueprint for the next highway and transit bill. The ARTBA Board unanimously approved the thoughtful and comprehensive policy report in May.

Visit ARTBA at artba.org to view a digital copy of the 32-page report, “The Road to the Next Federal Highway & Public Transit Investment Bill.”

Dean Franks, senior vice president, congressional relations, ARTBA says that ARTBA President and CEO Dave Bauer July 11 told members of the House Democratic Caucus to include a Highway Trust Fund revenue solution as part of any infrastructure legislation this year. Bauer reminded the members of Congress of the reliance states have on the federal transportation programs for highway construction spending. 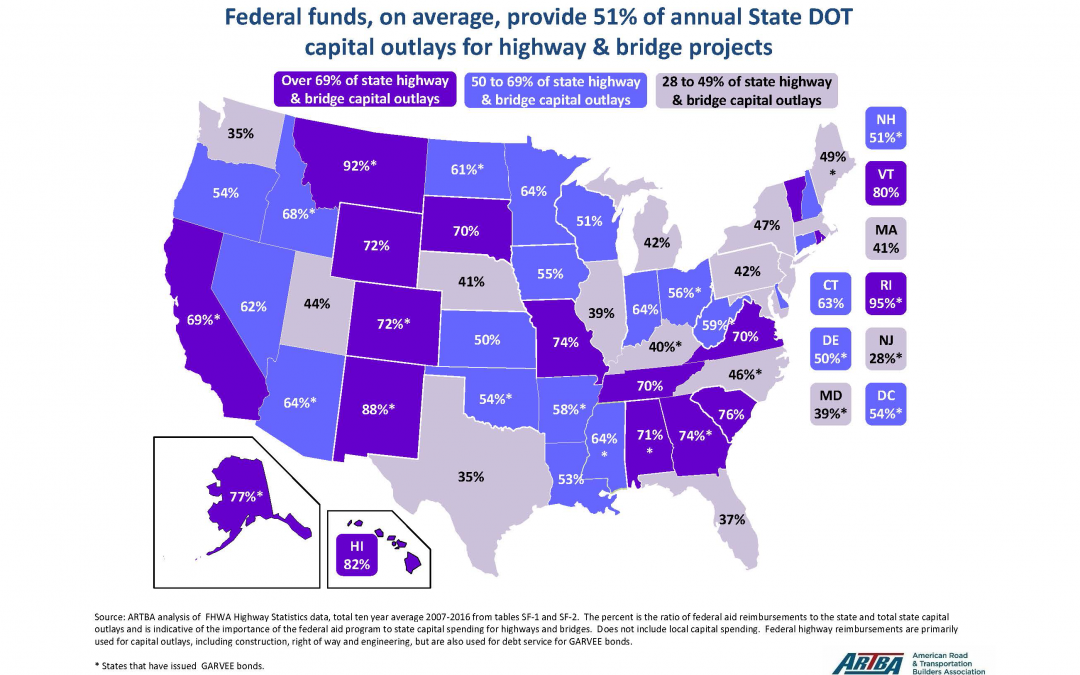 The map above, created by ARTBA staff using Federal Highway Administration (FHWA) data, was distributed to the members. It shows states, on average, depend on the federal government for 51 percent of their highway construction programs.

The closed-door session featured other business and labor executives who also emphasized the need to address the long-term solvency of the trust fund. Members of Congress who spoke touched on the need to get a robust infrastructure package completed, as well as the various options for funding and financing transportation investments. Caucus Chairman Hakeem Jeffries (D-N.Y.) organized the meeting.

A comprehensive infrastructure bill in the House of Representatives has yet to materialize, though discussions between the White House and the Congress are reportedly ongoing. The Senate Environment & Public Works Committee is pushing ahead on the reauthorization of a surface transportation bill, with a mark-up of a bill scheduled for Aug. 1.

Again, ARTBA’s Dean Franks adds,The bipartisan leaders of the Senate Environment & Public Works (EPW) Committee traded priorities for an upcoming surface reauthorization bill during a July 10 hearing.  Chairman John Barrasso (R-Wyo.) was the first to reference those users of the system should be the ones to pay for the infrastructure investments and particularly mentioned the need for electric vehicle drivers to begin paying into the system. Ranking Democrat Tom Carper (D-Del.) said, “I have always believed that a long-term focus on national needs must include identifying new source of sustainable, user-fee base revenues to support investments in transportation.”

Barrasso also publicly announced for the first time that the legislation the committee is drafting would be a five-year bill. The two committee leaders said they want to pass a bipartisan bill out of committee before the Senate adjourns for the annual summer work period. An Aug. 1 target has been set for consideration in the committee.

This will be the first action on a surface transportation law since enactment of the FAST Act in December of 2015. That law, which expires in September 2020, required $70 billion in General Fund transfers and unrelated offsets to help pay for the bill.

The EPW committee has jurisdiction over the highway policy provisions of a surface transportation authorization process, while three other committees will need to weigh in on public transportation, trucking, rail and tax issues.

ARTBA will continue working with Barrasso, Carper and all committee members to get a bill with increased and growing investment levels approved out of committee as soon as possible.

In the “summer driving season” editorial by The Washington Post, it points out,‘States Are Doing It. So Why Hasn’t Congress Increased the Federal Gas Tax?’
On July 1, gas taxes went up in 13 states, not only blue ones such as California and Illinois, but also red ones such as Indiana, Nebraska, South Carolina and Tennessee.

Roads, the importance of roads and transportation goes back to The Appian Way or Via Appia Antica in Rome, one of the most famous ancient roads. It was built in 312 B.C. by Appius Claudius Caecus. … Roman roads and especially the Appian Way were extremely important to Rome. It allowed trade and access to the east, specifically Greece. The importance of roads hasn’t changed; it’s become paramount to our way of life.

Maintaining our transportation infrastructure isn’t an expense it’s an investment.