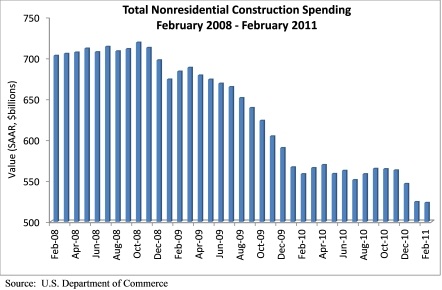 Six of the sixteen nonresidential construction sectors posted gains in spending on a monthly basis in February, including conservation and development, up 11.3 percent; manufacturing, up 5.4 percent; and power, up 2.5 percent. Five subsectors posted increases from the same time last year, including conservation and development, up 32.4 percent; highway and street, up 10.6 percent; and water supply construction, up 6.8 percent.

“As the impact of federal stimulus wanes, and the broader economy continues to recover at a respectable clip, the volume of privately financed construction is now edging higher,” said Basu. “However, for the time being, that slender growth is being more than offset by decreases in publicly financed construction, including projects financed by state and local governments.

“This pattern is likely to continue into the summer. Demand for privately financed construction will probably expand only gradually due to an excess supply of hotel rooms, office space, retail space and industrial space in many markets,” Basu said. “In contrast, the recent decline of construction activity in segments heavily financed by state and local governments will likely continue on that path.”