“Oil prices are not expected to fall significantly anytime soon, and they could continue their upward trajectory in the summer months.” —ABC Chief Economist Anirban Basu. 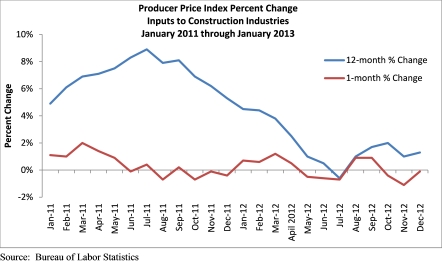 “We have been anticipating an increase in construction materials price volatility for several months,” said Associated Builders and Contractors (ABC) Chief Economist Anirban Basu. “Today’s data indicates that ABC’s prediction of increased volatility in 2013 after a period of unusually stable prices in 2012 is proving to be correct.

“Some of the materials experiencing instability relate more closely to residential construction,” Basu said. “Because of the severe downturn in residential activity, a certain level of productive capacity was removed from the marketplace. With demand for softwood lumber and other materials associated with residential construction now rising, prices also are moving higher. Moreover, increased exports to China have contributed to the recent surge in softwood lumber prices.

“The other major impetus for volatility in January was petroleum,” Basu said. “As many American consumers can attest, oil and gasoline prices have been rising recently. With the Indian and Chinese economies expected to expand more than 6 percent and 8 percent, respectively, and with part of the of the industrial world stabilizing, oil prices are not expected to fall significantly anytime soon, and they could continue their upward trajectory in the summer months.

“The bottom line is materials prices likely will continue to be more volatile this year,” Basu said.