Associated Builders and Contractors (ABC) today reports that its Construction Backlog Indicator (CBI) remained unchanged at 8 months from the third quarter through the fourth quarter of 2012; however, it is up 2.4 percent compared to a year ago. CBI is measured in months and reflects the amount of construction work under contract, but not yet completed by nonresidential contractors.

“CBI failed to rise during the fourth quarter of last year, a reflection of numerous factors, including fiscal cliff fears, highly constrained public capital budgets and lackluster macroeconomic growth,” said ABC Chief Economist Anirban Basu. “However, backlog did not decline, suggesting that nonresidential construction spending is likely to remain flat during the initial months of 2013 and then possibly trend higher during the latter part of the year.

“There are myriad sources of risk to the nonresidential construction outlook, including automatic sequestration, which likely would result in a pullback in federally financed construction projects, Basu said. “As the president and Congress struggle to agree on ways to reduce the federal government’s large deficits, this debt presents major issues for contractors in the form of higher future interest rates and slower long-term expansion.” 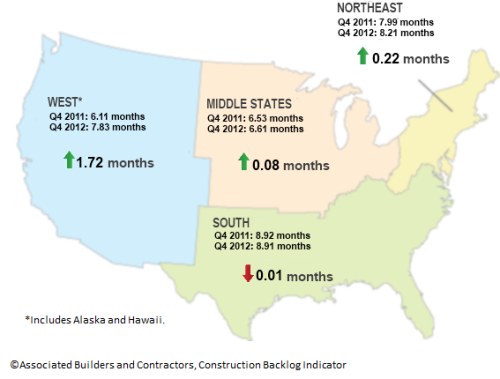