Associated Builders and Contractors (ABC) today reports that its Construction Backlog Indicator (CBI) expanded for the second consecutive quarter, up to 8 months in the third quarter of this year, a 3.5 percent increase from the previous quarter. CBI is measured in months and reflects the amount of construction work under contract, but not yet completed.

“While the nation’s nonresidential construction activity is likely to remain subdued as we approach the final months of 2012, the CBI is signaling that nonresidential construction spending will accelerate by mid-2013,” said ABC Chief Economist Anirban Basu. “However, this presumes the nation does not tumble over the fiscal cliff—a series of spending cuts and tax increases that kick in at the end of the year.

“Another recession would undermine the momentum of an already struggling construction industry,” Basu said. “The recovery in construction backlog, and in overall construction spending, would likely be more rapid today if not for the elevated level of uncertainty facing economic decision-makers.

“What the CBI data tells us is certain industries and geographies will be associated with more robust construction spending recovery, including segments related to energy generation, health care and infrastructure,” said Basu. “CBI dynamics also seem to suggest the latter half of 2013 may be associated with more rapid growth in construction spending than the first half of the year.”

“The CBI indicates the West region is racing back,” said Basu. “Better economic performances in markets such as San Jose, Los Angeles, Seattle, Phoenix and Las Vegas have positioned the West to enjoy surprisingly strong backlog recovery during the past three quarters. These markets appear to be driven by a combination of strong demand for technology, rising levels of consumer spending and stabilizing housing markets.

“Gradual recovery characterizes the Middle States region, though certain communities such as energy-rich North Dakota, economically vibrant Minnesota and states with rebounding auto manufacturing sectors like Indiana are experiencing faster construction spending growth,” Basu said. “In contrast, construction activity in the South has waned, due in part to significant slowing in industrial production, softness in the economies of Alabama and Mississippi, and low natural gas prices, which has impacted energy-related investment.”

FOr Regional trend data, see the Charts and Graphs PDF. 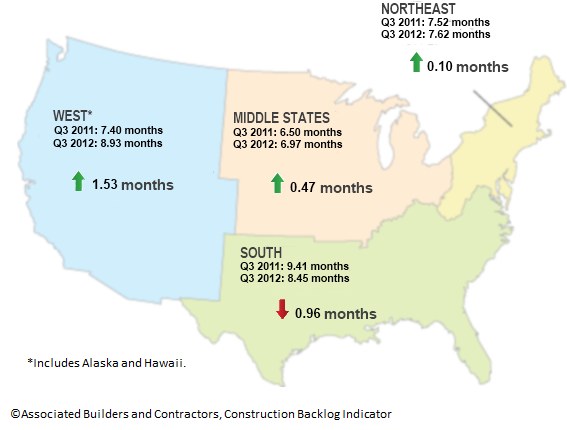 “The infrastructure category is the most susceptible to the impending fiscal cliff,” said Basu. “It is the only category that did not experience rising backlog during the third quarter.

“With the exception of the commercial construction category, average backlog among construction firms is roughly the same as two years ago, a reflection of just how soft the nonresidential construction recovery has been for many contractors,” Basu said. “The presumption is that progress will continue to be gradual during the initial quarters of 2013, but there is a possibility many projects postponed in 2012 due to elevated levels of uncertainty will come back online next year, spurring more rapid overall nonresidential construction recovery during the second half of 2013.”

For Industry trend data, see the Charts and Graphs PDF.

“Backlog rose for all size categories during the third quarter,” said Basu. “Part of this may be explained by the failure of competitors, which positions survivors to expand market share and backlog.

“In general, larger firms, which tend to have more solid banking and insurance relationships, appear best positioned to gain market share by taking on larger projects,” Basu said. “The fragile nature of smaller firms may help explain why these contractors are alone in terms of experiencing a year-over-year decline in average backlog.”