The U.S. construction industry lost 6,000 net jobs in August according to an analysis of U.S. Bureau of Labor Statistics (BLS) data released today by Associated Builders and Contractors (ABC). BLS also downwardly revised July’s estimate from 14,000 net new jobs to 11,000 net new jobs meaning that the construction industry has lost 25,000 net jobs since April after adding 68,000 through the first three months of 2016.

The nonresidential sector lost 10,700 net jobs in August after adding 9,600 jobs in July (revised down from 11,500). Employment in the heavy and civil engineering sector fell for the fourth time in five months, declining by 6,500 jobs on net, an indication of still weak infrastructure investment. The construction industry’s unemployment rate rose to 5.1 percent in August, but is still 3.4 percentage points lower than it was at the beginning of 2016.

“Most contractors continue to report decent backlog and although profitability remains a challenge, margins are thicker than they were several years ago,” said Basu. “Construction firms continue to complain about a lack of appropriately trained workers and construction wage costs are rising. These are all signs of an industry that remains busy.

“However, the data are also consistent with the notion that the pace of expansion in nonresidential construction activity has slowed,” warned Basu. “Nonresidential construction spending has expanded by less than 2 percent over the past year. The biggest culprit continues to be a lack of public sector capital spending on infrastructure, whether in the form of roads or water systems. Survey data regarding commercial real estate lending standards indicate that lending standards are beginning to tighten. While spending in office, lodging, and commercial categories has expanded significantly over the past year, the pace of growth is beginning to be constrained by a combination of regulatory pressures and growing concerns regarding overbuilding in certain key communities and product segments.

“The other consideration is that job growth remains rapid in a number of other key economic segments, including in e-commerce/distribution, retail, and a host of services,” said Basu. “This may be tempting some construction workers away from the industry, helping to explain continued low industry unemployment despite the job losses experienced in recent months.”

The national unemployment rate remained unchanged for a third consecutive month and stands at 4.9 percent. The labor force expanded by 176,000 persons in August and has grown by roughly one million persons over the past three months. Labor force participation stands at 62.8 percent. 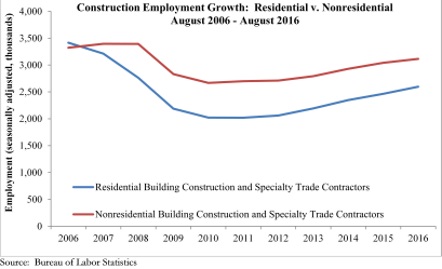