“Today’s nonresidential employment data can be viewed as reasonably positive from a topline perspective,” said ABC Chief Economist Anirban Basu. “Employment increased among nonresidential specialty trade contractors and also in the heavy and civil engineering segment. The nonresidential construction unemployment rate rose, which is actually good news, indicating that more people are searching for work in the industry. However, nonresidential building construction lost jobs, and there are reports that backlog has begun to shrink among a rising fraction of commercial contractors in several large U.S. metropolitan areas. Other data indicate that commercial real estate lending standards are tightening due to a combination of regulatory pressures and growing concerns regarding overbuilding in certain segments and in certain markets.

“Today’s job release also reveals relatively little about the near-term future,” said Basu. “Nonresidential construction spending has not been expanding in recent months, perhaps indicating that job growth in the industry will not be sustained. There is some hope that the end of the election cycle will usher forth a spirit of renewed confidence among private developers and public policymakers, which could translate into renewed nonresidential construction spending growth at some point next year.”

The construction industry unemployment rate increased by 0.5 percentage points in October and now sits at 5.7 percent. This rate, which is only presented on a nonseasonally adjusted basis, has risen in October in eight of the previous 10 years. The nationwide unemployment rate for all industries inched back down to 4.9 percent, falling a tenth of a percentage point from September. The national labor force shrank by 195,000 persons in October after expanding in each of the previous four months. Even so, the labor force has added over 2.6 million persons in the past twelve months, a 1.7 percent increase. 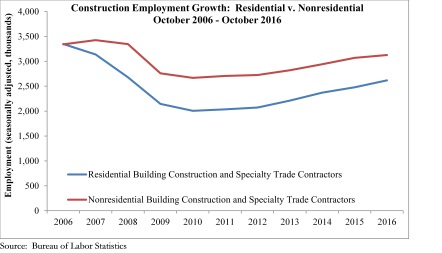