Despite a loss of 5,000 jobs in August, the unemployment rate for the nation’s construction industry went down one-tenth of a percent from the previous month to 13.5 percent, according to the September 2 report by the U.S. Labor Department. Year-over-year, the industry has added 4,000 jobs. 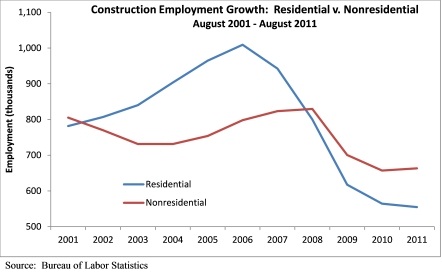 National employment was unchanged across all industries, with 17,000 jobs lost in government offset by 17,000 jobs added in the private sector. Year-over-year, the nation has added 1,259,000 jobs or 1.0 percent. Still, 14 million people are out of work and the unemployment rate remained 9.1 percent in August.

“The risk of recession is expanding rapidly,” said Associated Builders and Contractors Chief Economist Anirban Basu. “Yesterday’s release regarding construction spending and today’s release regarding employment both reflect the ongoing slowdown in construction activities. This comes as little surprise as a number of factors, including policy rifts, have had a chilling effect on business confidence, thereby slowing investment.

“In addition, the leading indicators are not positive with respect to construction employment,” Basu said. “Heavy and civil engineering, which had been a source of job growth, is now shedding jobs. Because these workers are often involved during the early stages of a project, job loss among this group signals slowing activity among those who tend to work during ensuing phases, including specialty trade contractors. Specialty trade contractor employment is also now on the decline.

“In contrast, building foundation and exterior contractors added 14,300 jobs for the month and 4,800 jobs from the same time last year on a non-seasonally adjusted basis,” said Basu. “Site preparation contractor employment grew by 4,800 jobs in August and 8,500 over the past twelve months. This suggests that some semblance of construction momentum remains.

“The question is whether the slowdown in overall economic activity since March will ultimately reverse this residual nonresidential construction momentum,” Basu said. “The outlook is not positive. Financial markets are responding poorly to today’s data release. Credit availability is likely to tighten further due to the growing perception of economic risk. None of this is good for construction and the next several months are shaping up to be challenging ones for the industry.”