“The hope is that this number, in conjunction with overall economic expansion, will ultimately produce a more sustained and more robust nonresidential construction recovery in the months ahead.” —ABC Chief Economist Anirban Basu. 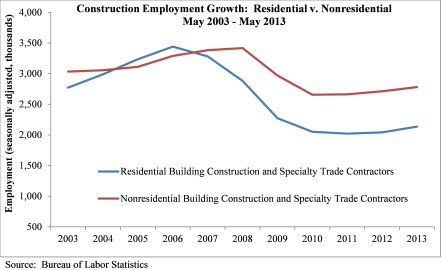 With the summer building season underway, the nation’s construction industry added 7,000 jobs in May as the unemployment rate dipped to 10.8 percent, which is down from 13.2 percent in April and the lowest rate since October 2008, according to U.S. Labor Department. Since May 2012, the industry added 189,000 jobs, or 3.4 percent.

Despite gains in every other construction sector, the nonresidential building sector lost 2,600 jobs for the month. Year-over-year, the sector added 15,300 jobs, or 2.3 percent. Nonresidential specialty trade contractors added 1,200 jobs in May and netted 51,600 workers, or 2.5 percent, since the same time last year. Heavy and civil engineering employment rose by 3,100 jobs in May and increased by 28,600 jobs, or 3.3 percent, from May 2012.

Overall, the nation added 175,000 jobs as the private sector expanded by 178,000 jobs and the public sector shrunk by 3,000 jobs. The national unemployment rate was 7.6 percent in May, up from 7.5 percent in April, but down from 8.2 percent compared to the same time last year.

“Much of the growth in construction continues to be in residential building, as indicated in the addition of 76,300 residential specialty trade contractors during the past year,” said Associated Builders and Contractors Chief Economist Anirban Basu. “Last month, that sector added 4,600 jobs, representing nearly two-thirds of total construction growth.

“Job growth has apparently been inadequate to foment robust nonresidential construction recovery,” Basu remarked. “This may be due to a number of factors, including still high vacancy rates in a number of different product categories.

“The mix of jobs has also likely played a major role, with many of the jobs added being temporary,” stated Basu. “Temporary workers are far less likely to induce new construction than the addition of permanent workers. The trend toward elevated temporary hiring is likely to continue over the next several months as many employers learn more about the implication of the Patient Protection and Affordable Care Act on their future health care costs.

“One bit of good news for the nonresidential construction segment was the addition of 3,100 jobs last month in heavy and civil engineering construction,” Basu said. “Healthy job performance in this segment is often considered a leading indicator for a number of other construction segments.

“The hope is that this number, in conjunction with overall economic expansion, will ultimately produce a more sustained and more robust nonresidential construction recovery in the months ahead,” Basu concluded.