Construction input prices remained unchanged in May, ending five consecutive months of price expansion, according to analysis of  Bureau of Labor Statistics data released today by Associated Builders and Contractors.  expanded 3.4 percent on a year-over-year basis.

Nonresidential construction input prices also remained unchanged on a monthly basis but increased by 3.1 percent on a yearly basis. Only crude petroleum prices experienced a significant month-over-month change in May, with prices falling 19.6 percent from April’s level. Natural gas prices remain significantly higher—up 66 percent—from the same time one year ago.

“Since March 2016, construction input prices have generally been on the rise,” said ABC Chief Economist Anirban Basu. “Many commodity prices established their cyclical nadir during last year’s first quarter, with prices then surging higher for a time. There were a number of factors at work, including stronger growth in parts of Europe and Asia and coordinated efforts by producers to curtail production and support higher prices.

“These factors are no longer strong enough to drive commodity and construction input prices higher,” said Basu. “The U.S. economy in particular does not appear positioned for the rate of growth many had anticipated at the beginning of the year. The Organization for Economic Cooperation and Development recently revised America’s growth outlook downward from 2.4 percent to 2.1 percent for the current year. Stronger U.S. economic growth has been expected to be a major driver of overall global economic improvement.

“The role of technology and previous investments in productive capacities is just as important,” said Basu. “As shale and other producers become more efficient, the price for certain items will tend to fall absent a countervailing increase in demand. With global economic growth remaining below par, commodity prices are no longer rising. This strongly implies that the trend of rising construction materials prices that was so apparent in 2016 will be less so during the current year.” 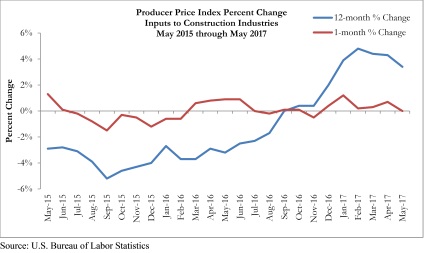