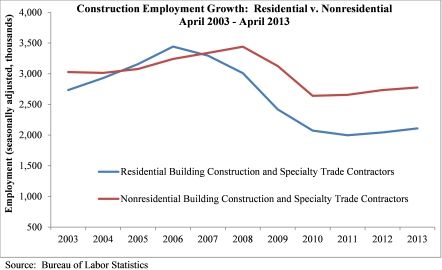 Nonresidential specialty trade contractor employment fell by 11,100 jobs in April compared to March, but is still up by 39,000 jobs, or 1.9 percent, compared to the same time last year. Residential specialty trade contractors added 7,100 jobs for the month and have added 69,300 jobs, or 4.7 percent, since April 2012. Heavy and civil engineering construction employment slipped by 3,800 jobs in April, but is up by 13,400 jobs, or 1.5 percent, over the last twelve months.

Across all industries, the nation added 165,000 jobs, with the private sector expanding by 176,000 jobs and the public sector shrinking by 11,000 jobs. According to the Bureau of Labor Statistics’ household survey, the national unemployment rate fell to 7.5 percent in April, down from 7.6 percent in March.

“Today’s report highlights the fact that different forms of economic activity require different levels of confidence,” said ABC Chief Economist Anirban Basu. “Leading the way in job creation in April were segments such as leisure/hospitality and retail trade. It doesn’t take that much confidence to take a short cruise or eat at a restaurant; however, it takes a considerable level of confidence to move forward with a significant construction project, and that level of confidence is still lacking.

“The recent construction spending report issued by the U.S. Census Bureau showed that both public and private nonresidential construction were down for the month, indicating that sustained momentum continues to elude the industry,” Basu said. “Today’s employment report reinforces the notion that sustained recovery remains elusive. While nonresidential construction employment is up by nearly 56,700 jobs on a year-over-year basis, the segment shed 15,900 positions in April. Further declines are possible in the near-term given weak construction spending dynamics and the anticipated impacts of sequestration on construction starts.

“The longer-term view is somewhat more optimistic,” Basu said. “There are many projects in various stages of planning and the expectation is that the nonresidential construction labor market will strengthen later this year. Leading construction indicators, including ABC’s own Construction Backlog Indicator, have been relatively upbeat lately, suggesting more sustained spending and employment momentum as we approach 2014.”