National construction employment declined by 3,000 net jobs on a seasonally adjusted basis in December, according to analysis of  U.S. Bureau of Labor Statistics data released today by the Associated Builders and Contractors (ABC).

The industry added 102,000 net new jobs on a year-over-year basis, the smallest increase in more than four years. Of the five subsectors, only residential specialty trade contractors added jobs in December (11,700 net new jobs). Nonresidential construction lost 13,400 net jobs for the month, largely due to losses in heavy and civil engineering, which lost 8,900 jobs. These data are adjusted for seasonal variations, which means that one cannot simply blame the poor job performance on the transition from November to December.

“One possible way to reconcile seemingly contradictory data is to point out that construction firms are reporting greater difficulty filling available positions,” said Basu. “More than 80 percent of ABC members report difficulty finding appropriately skilled labor. Accordingly, many construction firms are required to do more with fewer people, which should eventually show up in construction productivity data that reflect the amount of output generated by the average worker on a per-hour-worked basis.

“The significant number of jobs lost in the heavy and civil engineering segment indicates that U.S. spending on infrastructure remains low,” said Basu. “For much of the year, the level of spending in publicly-financed segments was stuck in reverse, and today’s data indicate that increased investment in the shared built environment is much needed.

“There were jobs lost in privately-financed segments as well,” said Basu. “Employment in nonresidential building construction dipped by 1,300 in December. While that’s not a massive loss, it is somewhat surprising given data regarding construction spending, including in the office and lodging segments.” 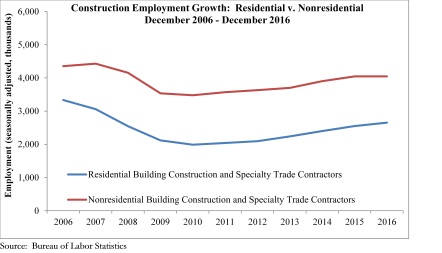