“Despite the end of month-to-month materials price decreases, prices remain low by historic standards and will likely continue to do so for the foreseeable future,” said ABC Chief Economist Anirban Basu. “Commodity prices, including oil prices, have been edging higher lately in response to a number of potentially temporary phenomena, including a weakening U.S. dollar. Coming into the year, the presumption among many market participants was that U.S. interest rates would rise meaningfully, thereby increasing the value of the dollar. Contrary to expectations, interest rates have not risen significantly, and the dollar has been weakening in response.

“That has helped to set the stage for the recent bounce-back in oil and certain other commodity prices,” said Basu. “Other factors have not been as supportive, including a still-weak global economy. Global economic weakness is likely to persist, and the dollar may begin to strengthen again. This means that construction firm managers should not assume that oil and other prices will rise steadily. In fact, reversals in commodity prices remain quite possible. While oil prices have risen sharply since lows achieved earlier this year, copper, natural gas and other prices have expanded only modestly. The next materials price report could easily show further inflation. The story of inexpensive materials will continue to be told.”

Softwood lumber prices grew 2.7 percent for the month and 1.8 percent from April 2015.

Concrete product prices expanded by 0.7 percent month-over-month and are up 3.1 percent year-over-year.

Natural gas prices increased 8.4 percent for the month but are down 25.7 percent from the same period one year ago.

Prices for prepared asphalt and tar and roofing and siding products fell by 1.9 percent from March 2016 and are down 1.5 percent from April 2015.

Prices for plumbing fixtures and fittings fell 0.1 percent for the month but are up 0.1 percent from the same time last year. 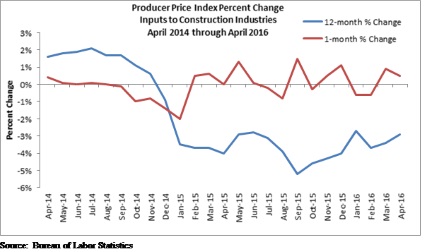