“Commodity markets were particularly frenzied in August due to a series of events in China, Brazil, Iran and other parts of the world.” —ABC Chief Economist Anirban Basu 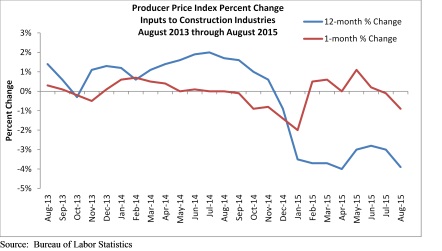 Prices for inputs to construction industries declined 0.1 percent in July after increasing 0.2 percent in June, according to the Aug. 14 producer price index release by the Bureau of Labor Statistics. Year-over-year prices were down 3 percent in July and have been down on an annual basis for each of the past eight months. Prices of inputs to nonresidential construction industries declined 0.3 percent on a monthly basis and are down 3.9 percent on a yearly basis.

On a year-over-year basis, prices were down 3.9 percent for the month and have fallen by at least 2.8 percent in each month this year. Prices have now fallen on a yearly basis in nine consecutive months, the longest such streak since March to November of 2009.

“Commodity markets were particularly frenzied in August due to a series of events in China, Brazil, Iran and other parts of the world,” said Associated Builders and Contractors Chief Economist Anirban Basu. “The result is that input prices continue to slide lower, defying predictions from earlier this year suggesting that commodity prices would stabilize and at some point head higher. Global demand remains low and there is a chance that prices could fall even lower during the months ahead.

“This is good news for most contractors, with the obvious exception being those in commodity-rich communities,” said Basu. “Already, North Dakota, Oklahoma, New Mexico and Alaska are deemed to be at risk of recession, and the ongoing slide in commodity prices will only serve to further weaken those economies and suppress overall construction activity.”

The key input prices that fell or remained flat include: