With the demand for construction services waning, the cost of construction materials fell 0.6 percent in August, according to the September 14 Producer Price Index (PPI) report by the Department of Labor. However, prices are 7.9 percent higher than one year ago. 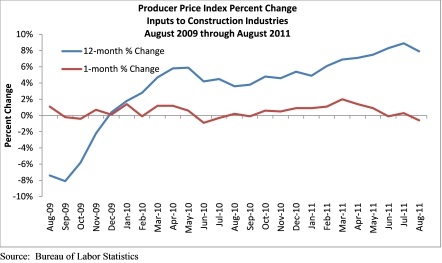 In contrast, a number of construction inputs posted increases for the month, including softwood lumber, up 2.8 percent in August and 4.8 percent higher year-over-year. Nonferrous wire and cable prices were up 0.5 percent compared to the previous month, and up 15 percent from the same time last year. Prices for concrete products inched up 0.1 percent for the month and are unchanged from August 2010. Prices for plumbing fixtures and fittings were flat in August, but are up 2.8 percent over the past twelve months.

“Today’s release gives us a snap shot of the current state of the nation’s construction industry,” said Associated Builders and Contractors Chief Economist Anirban Basu. “Demand for construction services, in general, continues to fall short of capacity. However, the decline in construction materials prices in August now makes the purchase of construction services more attractive.

“Much of the overall decline in materials prices is attributable to a decline in crude petroleum prices, but prices for many other items also slipped in August,” said Basu. “Among the key materials that experienced price declines were steel mill products, fabricated structural metal products and asphalt. These falling prices are likely attributable to perceptions of a slowing global economy. Not only has economic activity decelerated in America and in Europe, but forecasts for much of the emerging world are also being steadily downgraded.

“It is quite possible that materials prices will continue to decline in the months ahead. The global economy does not appear to be positioned for significant improvement in the near-term, which implies softer demand for construction materials,” Basu said. “However, the slowdown in global activity produces a belief among many investors that central banks around the world will increase money supply.

“That, in turn, reduces the attractiveness of paper assets such as bonds,” said Basu. “In response, certain investors sell bonds and purchase commodities, which cause those prices to rise even in the midst of generally weak economic performance.”