“The forces that had motivated higher commodity prices earlier this year appear to have eased.” —ABC Chief Economist Anirban Basu. 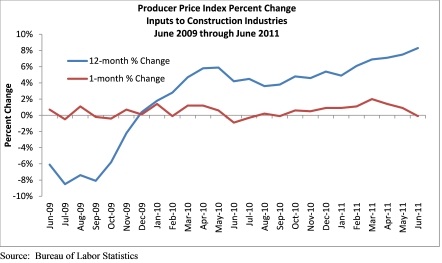 Crude energy prices decreased for the second straight month, down 4.1 percent in June. For the quarter, crude energy prices dipped 4.8 percent, but are still 18.6 percent higher than the same time last year. Overall, the nation’s wholesale good prices decreased for the first time in a year, slipping 0.4 percent for the month. For the second quarter, wholesale good prices increased 0.6 percent while prices are 7 percent higher than June 2010.

“With the U.S. Federal Reserve announcing the end of the second round of quantitative easing, and signs of economic slowing in much of Europe, portions of Asia and in the United States, the forces that had motivated higher commodity prices earlier this year appear to have eased,” said Basu.

“Still, the good news on materials prices may be short-lived,” said Basu. “In light of recent economic weakness, the Federal Reserve has begun to suggest that further monetary easing may be necessary.

“Further, with ongoing concerns regarding Greece, Italy, along with other debt, and with the U.S. facing a debt ceiling standoff, investors are quite likely to shift some of their investments from bonds into other assets, including commodities,” Basu said. “This would have the effect of reigniting commodity price increases.”