“The decline in construction materials prices is most welcome and may induce a larger number of projects to move forward than expected.” —ABC Chief Economist Anirban Basu. 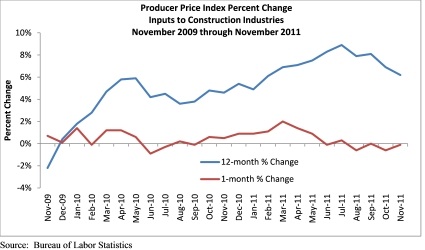 Nonresidential construction materials prices were unchanged for the month and are 7 percent higher than November 2010.

“The dollar has gained strength against a number of currencies during a period of global economic unrest and uncertainty,” Basu said. “Given the tumult in Europe, the dollar is likely to remain unusually stable in the weeks ahead.

“The other major factor is the slowing of key emerging economies, including China, India and Brazil,” said Basu. “The Brazilian economy was flat during the third quarter and the Chinese economy is facing its first real slowdown in years.