“The slowdown in economic momentum since March has translated directly into reduced demand for construction.” —ABC Chief Economist Anirban Basu. 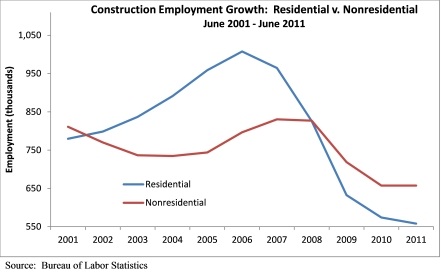 Across all nonfarm industries, the nation added a deeply disappointing 18,000 jobs in June, far short of the consensus expectation of a 125,000 monthly job increase. Year-over-year, nonfarm employment has expanded by 1,036,000 jobs or 0.8 percent. Private industries added 57,000 jobs in June and have added 1,695,000 jobs, or 1.6 percent, since the same time last year. Government employment shrunk by 39,000 jobs for the month and 659,000 jobs, or 2.9 percent, year-over-year. Overall, the nation’s unemployment rate rose to 9.2 percent in June.

“Despite some better news from other data releases in recent weeks, today’s employment report strongly suggests that the impact of higher energy prices, higher food prices and the three-headed crisis in Japan continues to impact the pace of economic activity and hiring in America,” said Associated Builders and Contractors Chief Economist Anirban Basu. “The slowdown in economic momentum since March has translated directly into reduced demand for construction, which helps explain the 400 jobs lost in the nation’s nonresidential building construction sector.

“There are other factors that may be impacting the economy, including the ongoing battle over the nation’s debt ceiling and issues related to sovereign debt in Europe,” Basu said. “Though oil prices have fallen since their peak of roughly $114 a barrel earlier this year, these other factors may prevent economic momentum from rebuilding in the near term.