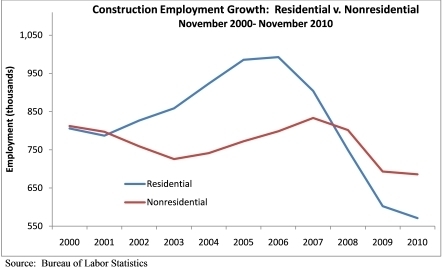 Heavy and civil engineering construction employment grew for the sixth straight month in November, gaining 1,300 jobs over October. That sector has gained a total of 23,800 jobs, or 2.9 percent, compared to the same time last year. The specialty trade construction sector lost 6,800 jobs in November and 102,100 jobs, or 2.8 percent, over the last 12 months.

Residential construction gained 500 jobs in November but is still down 31,300 jobs, or 5.2 percent, compared to one year ago. The construction industry as a whole lost 5,000 jobs in November following a 3,000 job increase in October. Compared to one year ago, the industry has 117,000 fewer jobs, a 2 percent decrease. The national unemployment rate for the construction industry was 18.8 percent in November, up significantly from the 17.3 percent unemployment rate in October, but still lower than November 2009 when it stood at 19.4 percent.

“Construction jobs fell again in November, indicating the equilibrium between supply and demand has yet to be achieved,” said ABC Chief Economist Anirban Basu. “Many firms have been working hard to retain their key employees through various mechanisms, such as bidding low on contracts just to secure work and stay busy. This cannot persist indefinitely and eventually, firms that continue to lose money will falter. Specialty trade contractors are particularly vulnerable, because one project that goes awry is often enough to end a firm’s existence. With many firms continuing to fail, construction employment has been declining as a reflection of diminishing industry capacity.

“The bright spot in the data continues to be heavy and civil engineering,” Basu said. “There are a number of possible explanations for this. Much of the work in this category is institutional work that requires engineering capacity, and engineering demand also is being created by ongoing stimulus-financed construction. In addition, there is significant demand for petroleum engineers and other professionals who work in power-generating industries. But in other categories, there are few bright spots, and a variety of indicators suggest that circumstances will not change significantly as we approach and enter 2011.

“A caveat to today’s jobs numbers may be that the government’s statistical approach to seasonal factors has served to make November look worse than it was,” Basu said. “However, today’s employment report is perfectly consistent with ABC’s prior statements regarding the still moderate pace of economic recovery in America.”