“Today’s employment numbers are consistent with the notion that the U.S. economy and the construction sector remain in recovery.”—ABC Chief Economist Anirban Basu. 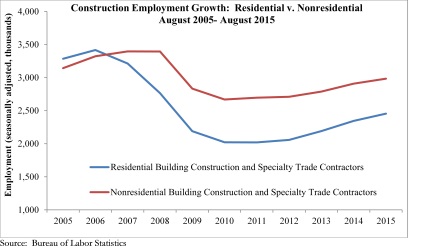 “The recent slide in nonresidential construction employment is likely an aberration caused by seasonal adjustments,” said Anirban Basu, Associated Builders and Contractors’ chief economist. “The first estimate of August employment tends to be low across all industries, and next month’s revisions may well show job growth in nonresidential construction. It’s also true that the construction industry tends to lag the broader economy. Considering that August was the 66th consecutive month of private-sector job growth—the longest streak ever—there’s plenty of reason for optimism about the construction industry’s economic health.

“The nationwide unemployment rate fell for all the right reasons,” said Basu. “There were 1.5 million fewer unemployed persons in August than July and nearly 200,000 more employed persons. Even the employment-to-population ratio rose, if only by 0.1 percentage points. The upward trend in the construction unemployment rate also represents a positive change. A higher—though still historically low—unemployment rate is not necessarily bad news for an industry plagued by skilled labor shortages.

“We are in the mid-cycle stage of the recovery, which is frequently the lengthiest stage of the business cycle,” said Basu. “This phase is associated with solid job growth, low and/or falling unemployment, respectable GDP growth, and significant construction volume. It is also associated with rising interest rates. Today’s employment numbers are consistent with the notion that the U.S. economy and the construction sector remain in recovery.”

The construction unemployment rate added 0.6 percentage points in August and now stands at 6.1 percent. This is a sizable increase from July’s eight-year low, though it’s not necessarily a bad sign for an industry that has been plagued by labor shortages. The unemployment rate across all industries shed 0.2 percentage points, reaching a seven-year low of 5.1 percent.