“The 400 jobs added in February is more in line with what would be expected given economic and atmospheric forces.” —ABC Chief Economist Anirban Basu. 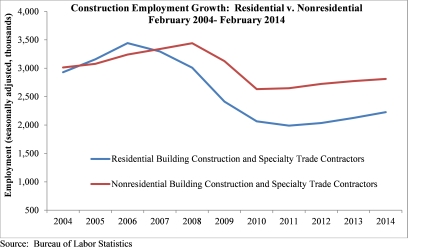 The underwhelming jobs number is particularly disappointing given the encouraging 26,600 jobs (revised) the segment added in January. The number would have been more dismal if not for the heavy and civil engineering segment, which added 12,300 jobs in February.

“Compared to January’s surprising gain of 26,600 jobs, the 400 jobs added in February is more in line with what would be expected given economic and atmospheric forces,” said Associated Builders and Contractors Chief Economist Anirban Basu. “It remains likely that nonresidential construction employment gains will snap back with the weather during the second quarter of 2014.”

According to the BLS household survey, the national unemployment rate expanded by 0.1 percent in February, rising to 6.7 percent. Perhaps most importantly, there was evidence of accelerated wage gains among production workers—something that will increasingly impact construction firms’ profitability during the ensuing months of 2014.

• The heavy and civil engineering construction segment gained 12,300 jobs in February and job totals are up by 12,100 (1.4 percent) annually.

• Nonresidential specialty trade contractors gained 3,700 jobs for the month; employment in that category is up by 25,200 jobs (1.2 percent) annually.

• Residential building construction employment rose by 3,400 jobs in February and is up by 50,000 jobs (8.3 percent) annually.

• Nonresidential building construction employment fell by 3,300 jobs for the month, but is up by 13,300 jobs (2 percent) annually.