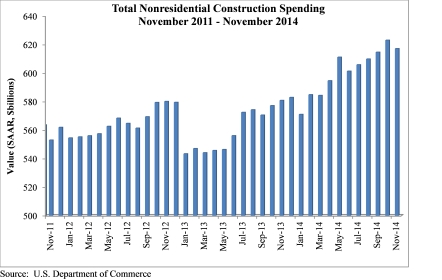 Nonresidential construction spending fell 1 percent on a monthly basis in November, but has still managed to expand 4 percent on a year-over-year basis according to the Jan. 2nd release from the U.S. Census Bureau. Spending for the month totaled $617 billion on a seasonally adjusted, annualized basis. Moreover, the government revised the October spending figure up from $611.8 billion to $622.9 billion.

“Conditions remain conducive to continued construction spending growth,” said Basu. “Both the quantity and quality of job growth continues to improve, which will fuel the ongoing recovery in office-related spending. The dip in oil prices may provide the strongest headwind for construction spending growth. Not only will inexpensive fuel greenlight construction projects that may otherwise be stalled, it also serves to boost consumer spending. This in turn may lead to more construction starts, specifically in the lodging and amusement and recreation categories.

Five of 16 nonresidential construction subsectors posted increases in spending in November on a monthly basis.