Nonresidential construction spending fell by 2 percent on a monthly basis in June 2017, totaling $697 billion on a seasonally adjusted, annualized basis according to an analysis of U.S. Census Bureau data released today by Associated Builders and Contractors. June represents the first month during which spending has dipped below the $700 billion per year threshold since January 2016.

“Coming into the year, there were high hopes for infrastructure spending in America,” said ABC Chief Economist Anirban Basu. “The notion was that after many years of a lack of attention to public works, newfound energy coming from Washington, D.C., would spur confidence in federal funding among state and local transportation directors as well among others who purchase construction services. Instead, public construction spending is on the decline in America. Categories including public safety and flood control have experienced dwindling support for investment, translating into a nine percent decline in public construction spending over the past twelve months.

“On the other hand, several private segments continue to manifest strength in terms of demand for construction services,” said Basu. “At the head of the class are office construction, driven by a combination of job growth among certain office-space-using categories as well as lofty valuations, and communications, which is being driven largely by enormous demand for data center capacity.

“While there are certainly some parts of the nation experiencing significant levels of public construction, those areas have increasingly become the exception as opposed to the rule,” said Basu. “The more general and pervasive strength is in private segments. Based on recent readings of the architecture billings index and other key leading indicators, commercial contractors are likely to remain busy for the foreseeable future. The outlook for construction firms engaged in public work remains unclear. 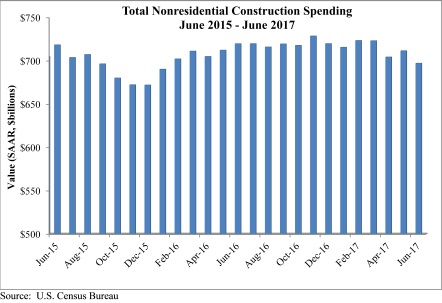 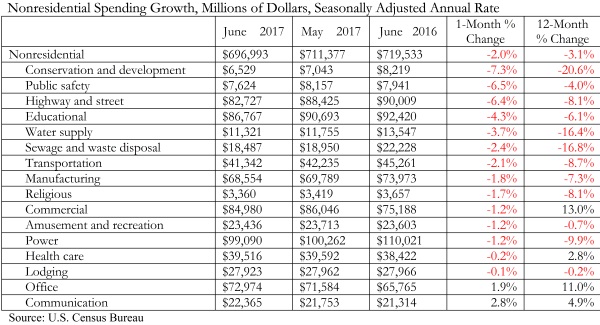