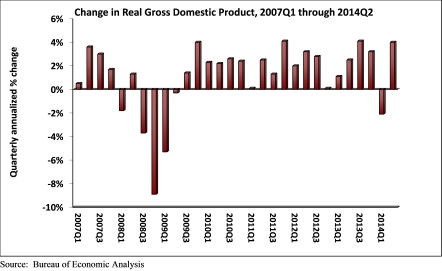 Nonresidential fixed investment expanded 5.5 percent and residential fixed investment expanded 7.5 percent during the second quarter of 2014 according to a July 30 release by the Bureau of Economic Analysis. Overall, real gross domestic product (GDP) increased 4 percent (seasonally adjusted annual rate) during the second quarter of 2014 following a 2.1 percent decrease (revised from -2.9 percent) in the first quarter.

“The robust second quarter growth was primarily driven by higher consumer and business spending,” said Associated Builders and Contractors Chief Economist Anirban Basu. “Today’s 4 percent reading on second quarter GDP blew away consensus expectations of 3 percent, and the first quarter wasn’t quite as bad as suspected either. Viewed collectively, the data indicate that the U.S. recovery should exhibit decent momentum through the balance of the current year and into 2015.

“Nonresidential fixed investment expanded even more briskly than the broader economy,” said Basu. “However, the rebound from the dismal first quarter was broad-based; federal government spending was the only segment that contracted during the second quarter.”

Estimates for 2013 were revised to 2.2 percent growth, up from 1.9 percent in previous estimates. However, the revisions also show that the economy grew at a slower pace from 2009 to 2012 than previously thought. “This recovery was already the weakest in U.S. history,” said Basu. “Since the recession ended in the second quarter of 2009, the economy has grown at an average annual rate of just 2.3 percent (revised down from 2.4 percent in previous estimates).

“Despite the slow and laborious recovery, there is reason for optimism,” said Basu. “Today’s announcement marks the nonresidential fixed income segment’s strongest quarter since the beginning of 2012. In light of this positive data, expect nonresidential employment growth and construction spending—both of which will be released on Friday—to continue to trend higher.”

The following segments expanded during the second quarter and/or contributed to GDP.

•Real final sales of domestically produced output—minus changes in private inventories—increased 4.3 percent after a 0.4 percent increase in the first quarter.

•State and local government spending expanded 3.1 percent during the second quarter after falling 1.3 percent in the first quarter.

•Federal government spending fell 0.8 percent in the second quarter following a 0.1 percent decrease in the prior quarter.