Real gross domestic product (GDP) expanded 2.9 percent on a seasonally adjusted annualized rate during the third quarter of 2016, according to an analysis of Bureau of Economic Analysis data released today by Associated Builders and Contractors (ABC). This follows a 1.4 percent increase during the second quarter and represents the tenth consecutive quarter of economic expansion.

“Today’s GDP release will generally be viewed favorably both for the construction industry and for the larger economy,” said ABC Chief Economist Anirban Basu. “The acceleration in real GDP growth was driven by a combination of factors, including an upturn in exports, a smaller decrease in state and local government spending and an upturn in federal government spending. One of the biggest impacts came from greater private inventory investment, likely in response to expectations for reasonably strong consumer spending. Growth in personal consumption expenditures was responsible for almost half of third quarter GDP growth. However, this build in inventories is likely to subtract from economic growth in future quarters, though not massively.

“According to the most recent data available from the Bureau of Economic Analysis, nonresidential investment in structures has contributed little to GDP over the past five quarters,” said Basu. “While there are certain categories of nonresidential construction that have been active in terms of spending growth, including the office, lodging and commercial categories, for the most part spending growth has been lackluster.

“Third quarter growth was solid, but future quarters may not be as good,” said Basu. “The economy will have to deal with a number of headwinds going forward, including a stronger dollar, building inflationary pressures and higher interest rates. Consumer spending growth will continue to lead the recovery. While this will help support construction spending in certain categories, including distribution centers, nonresidential investment in structures is likely to expand only slowly in early 2017.” 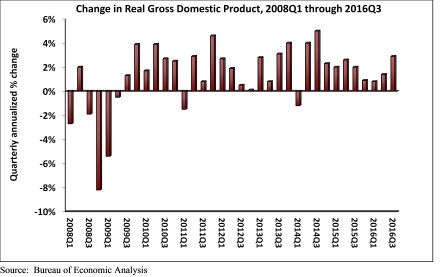