“In the first half of 2015, both the broader economy and nonresidential investment lost the momentum they had coming into the year.” —ABC Chief Economist Anirban Basu. 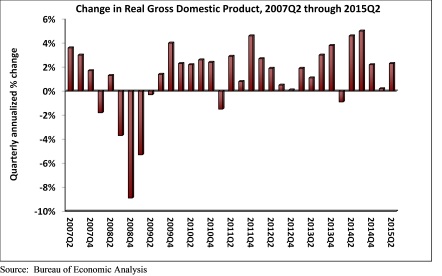 “In the first half of 2015, both the broader economy and nonresidential investment lost the momentum they had coming into the year,” said Associated Builders and Contractors Chief Economist Anirban Basu. “Rather than indicating renewed progress in terms of achieving a more robust recovery, today’s GDP release indicates that a variety of factors helped to stall investment in nonresidential structures. There are many viable explanations, including a weaker overall U.S. economy, a stronger U.S. dollar, decreased investment in structures related to the nation’s energy sector, soft public spending, and uncertainty regarding monetary policy and other abstracts of public policy. While the expectation is that the second half of the year will be better, unfortunately not much momentum is being delivered by the year’s initial six months.

“Perhaps the most salient facet of this GDP release was the revisions,” said Basu. “The BEA revised the first quarter estimate upward from -0.2 percent to 0.6 percent annualized growth. This is not surprising; many economists insisted that the economy did not shrink in the first quarter. However, the BEA also downwardly revised growth figures from the fourth quarter of 2011 to the fourth quarter of 2014. Over that period, GDP increased at an average annual rate of 2.1 percent, 0.3 percentage points lower than previously thought. These revisions could be a function of the agency’s ongoing effort to tackle residual seasonality, a pattern in which seasonal adjustments led to repeated first quarter slowdowns. It will take a few more quarters to understand the full impact of the improved seasonal adjustments.”

Performance of key segments during the first quarter: