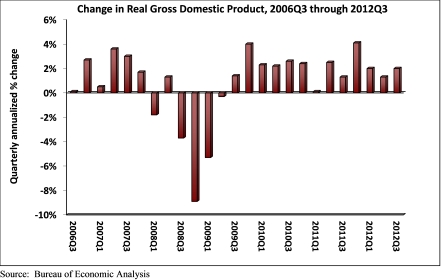 Personal consumption expenditures increased 2 percent in the third quarter as spending on goods increased 4.4 percent and spending on services inched up 0.8 percent. Real final sales of domestic product—GDP less change in private inventories—increased 2.1 percent for the quarter following a revised 1.7 percent increase in the second quarter.

“Nearly every major aspect of the domestic economy expanded during the third quarter of the year,” said Associated Builders and Contractors Chief Economist Anirban Basu. “Unfortunately, that sector was nonresidential fixed investments, which overlaps substantially with nonresidential construction activity.

“Many economists attribute ongoing sluggish macroeconomic performance to a heightened level of uncertainty emerging from both foreign and domestic sources,” said Basu. “However, certain segments of the economy are doing just fine, uncertainty notwithstanding.

“Weak job growth continues to suppress the demand for new space while new regulatory framework appears to be limiting the pace of commercial real estate lending,” said Basu. “There is little reason to believe these dynamics will change significantly during the current quarter.

“There is a consensus among economists that once the election is behind us—and if the nation resolves its fiscal cliff issues—economic activity will pick up due to improved confidence,” Basu said. “This is possible, but those in nonresidential construction know construction spending often lags broader economic recovery by twelve to eighteen months. The implication is that even under reasonably optimistic scenarios, nonresidential construction spending may not improve markedly for several quarters.”