The U.S. economy’s performance slowed in the first quarter of 2017, but nonresidential fixed investment expanded at an impressive 9.4 percent seasonally adjusted annual rate, according to analysis of U.S. Bureau of Economic Analysis data released today by Associated Builders and Contractors (ABC).

Real gross domestic product (GDP) expanded 0.7 percent on a seasonally adjusted annualized rate during the first three months of the year. Despite the subdued growth, GDP has now expanded in every quarter over the past three years. Fourth quarter 2016 growth was revised upward from a 1.9 percent annual rate of expansion to a 2.1 percent annual rate.

“It was expected that first quarter GDP would indicate that the U.S. economy remained unable to generate a high rate of growth,” said ABC Chief Economist Anirban Basu. “Many economic actors appear to have adopted a cautious attitude in an environment characterized by a considerable amount of policy uncertainty. The decline in defense expenditures is likely to be a surprise to many given recent discussions about supposed vast increases in defense outlays.

“The investment in nonresidential structures during the first three months of the year is particularly remarkable in an environment otherwise characterized as generating little economic growth,” said Basu. “Rather than adopt a wait-and-see attitude, developers appear to have acted with conviction, taking advantage of growing confidence among investors and other market participants to forge ahead with planned projects. While the new presidential administration has yet to implement even a small fraction of its pro-business agenda, the development community continues to express confidence in the administration’s ability to create the conditions necessary for a much more vibrant U.S. economy.

“The expectation is that the balance of the year will be associated with much more rapid growth,” said Basu. “Consumer spending should pick up after a weak first quarter, given accelerating wage increases and elevated levels of job security. Business spending is also likely to expand briskly, particularly if the Trump administration is able to make meaningful progress on the corporate and personal income tax front.” 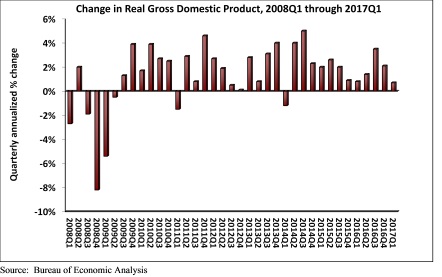