Nonresidential construction surged in November, according to analysis of U.S. Census Bureau data released today by Associated Builders and Contractors (ABC). Nonresidential spending expanded to $712.4 billion on a seasonally adjusted, annualized rate in November, representing the highest level of spending in eight years.

“With a new presidential administration coming to Washington there is a presumption that the economic dynamics of the near-term future will be markedly different than they have been,” said Basu. “If the last few weeks are any indication, the 2017 economy will be associated with tax cuts, more government spending, less financial regulation, faster economic growth, a stronger U.S. dollar, robust stock market performance and greater overall CEO confidence. That should translate into improved construction spending moving forward.

“It should be noted that data for November largely reflect the economic dynamics of the past,” said Basu. “Many construction firms have reported that they remain busy but have become concerned that work could dry up in certain markets in 2017 or 2018. This has been due to a combination of factors, including evidence of overbuilding in segments such as lodging and office buildings, even in Tier 1 markets like New York and Miami.

“Some are of course unnerved by prospects for shrinking exports given a stronger U.S. dollar, larger budget deficits and rising interest rates,” said Basu. “These are legitimate concerns and may ultimately serve to suppress U.S. economic dynamism. However, for now, the nonresidential construction outlook remains promising. The major source of uncertainty regarding the near-term outlook stems from whether the incoming administration will successfully pass an infrastructure package and how quickly such legislation would translate into stepped-up public construction spending.” 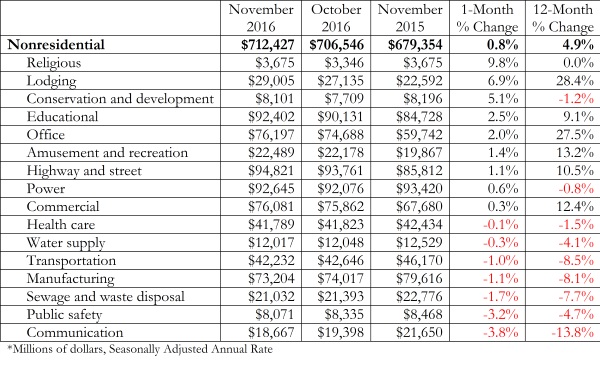 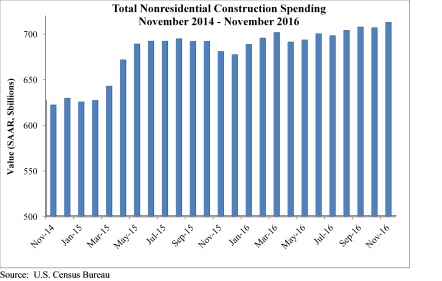