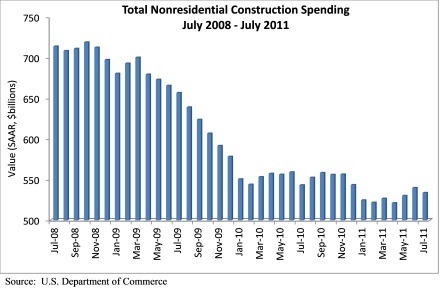 Eleven construction subsectors posted decreases for the month including manufacturing, down 6.2 percent; conservation and development, 5 percent lower; and public safety, down 4 percent. Construction subsectors with the largest decreases on a 12-month basis were lodging, down 24.6 percent; religious, 20.8 percent lower; and sewage and waste disposal, down 13.7 percent.

“We are now facing a period of declining spending in both public and private construction categories,” said Associated Builders and Contractors Chief Economist Anirban Basu. “The momentum in commercial construction spending continued through July, but with financial market volatility and economic uncertainty generally on the upswing, it is likely that lending has become more cautious, which will translate into diminished commercial construction starts going forward.

“Today’s construction spending data are now reflecting the renewed weakness that began to pervade the economy earlier this year,” Basu said. “The most recent gross domestic product data indicated that the economy grew less than 1 percent on an annualized basis during the first half of this year, and that inevitably will translate into weaker construction spending during the months ahead.