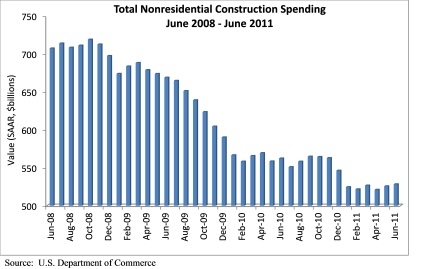 Five nonresidential construction subsectors posted decreases for the month, including conservation and development, down 6.6 percent; educational, down 3.2 percent; amusement and recreation, down 3.1 percent; highway and street, down 1.6 percent; and religious construction, down 1.4 percent. Of the twelve subsectors experiencing decreases in spending year-over-year, they are religious, down 25.7 percent; lodging, down 24.3 percent; and water supply, down 14.3 percent.

“Some may be surprised with today’s report that construction spending edged higher in June given the overall weakness of the U.S. economy in recent months,” said Associated Builders and Contractors Chief Economist Anirban Basu.

“It is important to note in this context that construction activity remains a lagging indicator of overall economic activity, which implies that the modest uptick in construction spending in June was a reflection of economic momentum that pre-existed the recent soft patch,” Basu said.

“With the softness in economic activity persisting, perhaps through the balance of this year and beyond, the ongoing increase in total nonresidential construction spending is unlikely to last,” said Basu.

“With government support for construction on the wane, the hope has been that a privately financed recovery would begin in earnest,” Basu said. “To a certain extent, that has occurred, with manufacturing, communication, power and health care construction leading the way.

“Should the nation’s economic recovery pick up steam later this year, construction will again be positioned for an increase in spending, but for now the outlook is not particularly promising,” said Basu.