Real gross domestic product (GDP) expanded by just 0.7 percent (seasonally adjusted annual rate) during the fourth quarter of 2015, according to an analysis of Bureau of Economic Analysis data released today by Associated Builders and Contractors (ABC). This paltry growth follows a 2 percent increase during the year’s third quarter and a 3.9 percent increase during the second quarter. For the year, GDP expanded by 2.4 percent, matching the rate of growth seen in 2014.

“The economy did not end the year well,” said ABC Chief Economist Anirban Basu. “Today’s GDP data adds weight to the argument that the U.S. is in a corporate profits recession, an industrial recession, and was experiencing a softening of investments. With the exception of the residential building sector, business capital outlays have declined as corporations deal with a combination of sagging exports, competitive imports, declining energy related investments, rising wage pressures and healthcare costs. 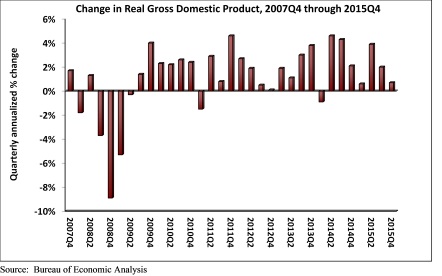