“Construction industry stakeholders may need to wait until the spring for decision-makers to have enough confidence to allow for a reaccelerating of natural economic growth.”” —ABC Chief Economist Anirban Basu. 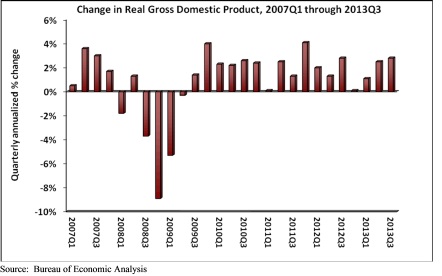 “Today’s GDP release represents the last piece of information regarding U.S. output and nonresidential fixed investment that is untouched by the federal government shutdown in October and the most recent debt ceiling debate,” said Associated Builders and Contractors Chief Economist Anirban Basu. “Of course, September economic activity could have been impacted by rising uncertainty as the first October budgetary deadline approached.”

“The third quarter also was impacted by a slew of other headwinds, including rising interest rates,” Basu said. “Fourth quarter GDP will not be much better, and could be worse due to interruptions in federal operations and an associated decline in consumer confidence.

“Because the latest budget deal only keeps the federal government open until Jan. 15 and only raises the debt ceiling through Feb. 7, construction industry stakeholders may need to wait until the spring for decision-makers to have enough confidence to allow for a reacceleration of natural economic growth,” Basu said.

The following segments expanded in the third quarter.

A number of key segments did not experience growth in the third quarter.