“While the construction spending data remain challenging to interpret, the general story is still positive overall,” said ABC Chief Economist Anirban Basu. “Nonresidential construction spending is up by nearly 3 percent on a year-over-year basis. Certain segments are red hot, including the office and lodging segments, both of which have experienced more than 20 percent spending growth over the past 12 months. Investors, both domestic and global, continue to search for deals during a period of low global interest rates. Commercial real estate has emerged as one of the favorite destinations for investor capital, helping to raise property values and prompt significant numbers of construction starts.

“While certain private segments flourish, publically financed categories continue to languish,” said Basu. “This is particularly true in the public safety, conservation and development and sewage and waste disposal categories, all of which have seen year-over-year spending declines of 6.5 percent or more. The outcome of the election has lifted expectations for spending in many publically financed categories. Both major presidential candidates had discussed investing in infrastructure during their campaign. However, there was a conventional wisdom suggesting that divided government would be the most likely outcome, which would likely have translated into more stalemates and less infrastructure spending. With one party now controlling the U.S. Senate, U.S. House of Representatives and the White House, a meaningful infrastructure package may be more likely. While that will not affect spending numbers in the immediate near term, the longer-term outlook for infrastructure spending has brightened considerably since our previous report.

“In addition to the promise of augmented infrastructure spending, there are indications of corporate and personal tax cuts to come, increased defense spending, deregulation of the financial system, and lighter regulation of energy producers,” said Basu. “All of these policy shifts are consistent with greater construction spending going forward, at least for the foreseeable future. In other words, the 2017-18 nonresidential spending outlook has improved over the last several weeks. It remains to be seen how much the president-elect can accomplish over the next few months, and what affect that will have on the nonresidential construction segment of the U.S. economy.” 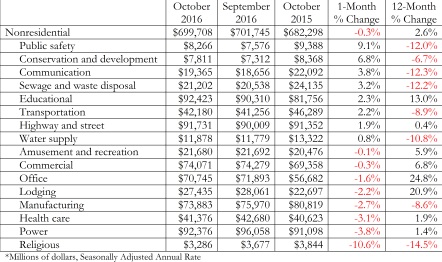 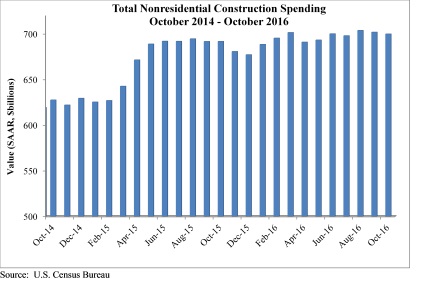