Nonresidential construction spending remained unchanged in February, according to analysis of U.S. Census Bureau data released today by Associated Builders and Contractors (ABC). The segment totaled $701.9 billion on a seasonally adjusted annualized rate for the month, marking the seventh consecutive month in which nonresidential spending sat above the $700 billion threshold.

Private nonresidential construction spending faltered in February, with six of the 11 subsectors experiencing a month-over-month spending decrease. The communication category experienced a particularly precipitous decline, falling 8.1 percent for the month. Public nonresidential spending increased for the first time since October of 2016.

“Many construction firm leaders expect that ultimately, nonresidential construction spending will begin to climb as the new administration in Washington begins to implement its pro-business agenda,” said Basu. “That said, there is an awareness that the impact of proposed pro-business policies will not be immediate and may actually not be felt in earnest until 2018 or even 2019.

“Even in the absence of policy impacts, there has been a general improvement in overall business confidence in America,” said Basu. “This should translate into better construction spending performance over the months ahead, particularly in privately financed categories.” 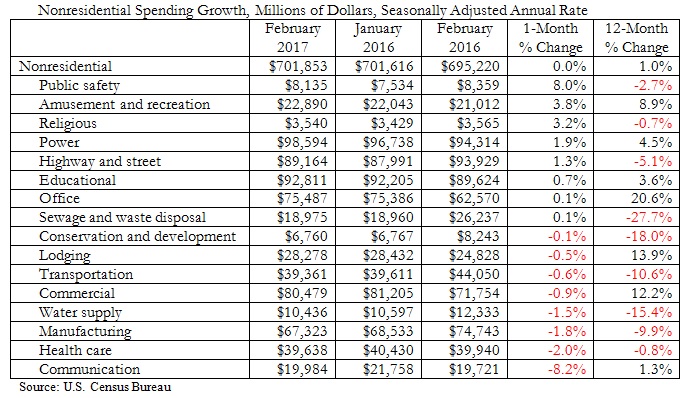 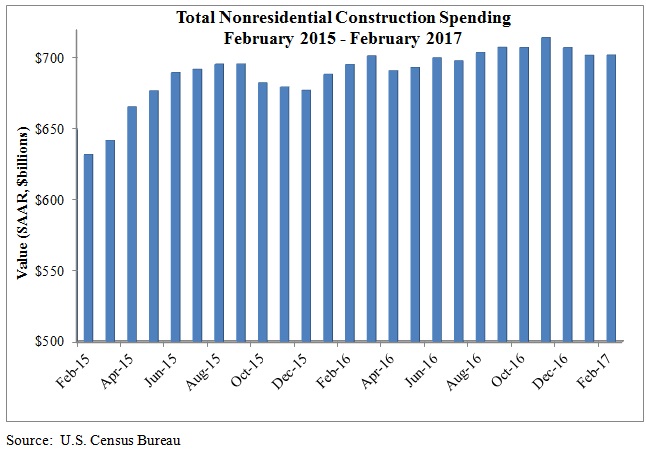