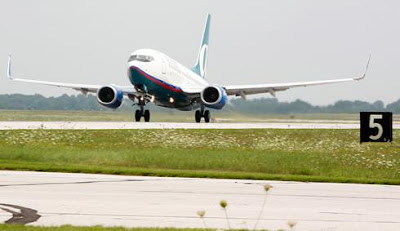 Akron-Canton Airport, one of the fastest-growing airports in the country, wants to redesign its entrance road to ease traffic and add a curbside lane for taxis and other shuttles. The Ohio airport has already conducted design and other preliminary work.

It just might happen. President Obama’s $787 billion economic stimulus program will give about $1.1 billion to the Airport Improvement Program, or AIP, grants that the Federal Aviation Administration (FAA) doles out to airports each year for such upgrades.

“It’s an additional billion dollars. That’s tens of thousands of jobs,” says Todd Hauptli of the American Association of Airport Executives of the extra airport construction dollars. “We believe airports could have spent even more money than Congress made available, but it’s a significant increase in infrastructure investment.”

But, that isn’t all the nation’s airports get from the American Recovery and Reinvestment Act. There’s $1 billion to allow some airports to upgrade security checkpoints and install a new system for detecting explosives in checked luggage.

The infusion of construction money isn’t as much as airports, which handle about 4 million travelers daily, want or need. But it represents 30% of the $3.5 billion that the FAA grants each year to airports for construction projects that enhance safety, security, capacity and environmental concerns.

The new dollars are for projects that are “shovel-ready” and calls for the FAA to distribute half the money within 120 days and the rest within a year.

The Stimulus Package fell short of the industry’s goal of getting a minimum of $3 billion, which the House proposed in its version of the bill. And it’s far short of financing what airports say they need. The FAA estimates airports have $49.7 billion worth of projects eligible for federal construction money in the next five years.

“($1.1 billion) is not a lot of money,” says Rick Vacar, director of aviation for the Houston Airport System, which includes Bush Intercontinental. “Large airports can use a billion by themselves.” Ben DeCosta, aviation general manager of Hartsfield-Jackson Atlanta International, says he was also hoping for a larger package but is “happy to have some support.” He may seek some of the $75 million needed to build the ramps at the new international terminal that’s scheduled to open in 2012. Akron-Canton also wants $13 million to finish a $60 million runway-extension project.

Some airports also will get some of the $1 billion allocated to the Transportation Security Administration to improve security checkpoints and help airports install in-line baggage-screening systems. Those systems check bags for explosives while conveying them to planes.

Airports rely heavily on revenue bonds and used more than $5 billion in new issues to finance improvements in 2007.

Currently, federal tax law classifies a majority of airport bonds as “private activity” bonds, meaning investors must pay the alternative minimum tax rate on proceeds. That higher rate, airport executives say, has made airport bonds unpopular. Because of this, airports have to pay higher interest rates to float their bonds.

The law also allows tax refunds for investors who bought private activity airport bonds that are issued in the past five years and are maturing in 2009 or 2010.

“In the short term, it will help open up the credit market,” Kurt Krummenacker, a public finance analyst at Moody’s, says of the tax break.

Examples of airport projects that are eligible to receive federal stimulus dollars: