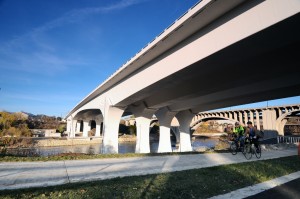 Legacy for Users (SAFETEA-LU) will expire and we will be left with a patch to “help us” limp along until Congress comes up with a “better bill.” According to statements published by Congressman James Oberstar (D-MN) ,chairman of the House Transportation and Infrastructure Committee, there is no need to wait, the committee has been studying and researching the problems and possible solutions for several years.

Oberstar’s draft “provides $337.4 billion for highway construction investment, including at least $100 billion for Capital Asset Investment to begin to restore the National Highway System (including the Interstate System) and the nation’s bridges to a state of good repair …” Chances of this surviving congressional compromising are slim. One of the biggest problems the Highway Trust Fund faces is funding. The current level of fuel tax revenues is inadequate and expected to become even more inadequate, and the current administration and most of Congress refuse to raise taxes or implement other methods of collection.

ASCE’s Infrastructure Report Card gave us a D with roads getting a D- and bridges getting a C. I don’t know about you, but these grades aren’t acceptable, especially when you consider one simple fact: this is how we get our families to the store, to church, to school and this is how we go to work. Forget the fact that the condition of our transportation infrastructure impairs our ability to compete globally or that it

causes endless hours of lost time sitting in congestion. How irritated do you get when you’re in a cab stuck in traffic and you watch the meter adding to the fare?

All of the trucks, buses, vans and other vehicles sitting trapped in the endless hours of congestions in places like New York, Atlanta, Los Angeles, Houston, Dallas, San Diego, Detroit, and the list goes on, are adding to the cost of everything we buy and everything we sell. The meter is running, you’re sitting and watching it, and paying for every second.

TRIP, a national transportation research group, has been doing a series of studies on individual state transportation needs. All of these studies end up confirming the findings of ASCE, as described in its report card, and calling attention to the fact that this condition is pandemic in scope, that it will not go away and that we need to do something about it now.

Today, at noon EDT, four very powerful organizations joined forces and held a press conference to discuss a letter that was jointly sent to the President and Congress, yesterday afternoon, regarding this extremely important issue.

Immediately following the press conference, Dennis Slater, president of AEM, issued a statement joining in and supporting the comments voiced by the four industry leaders. The combined group represents more than 60 million voices, and they were all in harmony.

Donohue set the tone by stating that the Chamber wanted the 18-month proposed lag time reduced. He said, “We will support gas and diesel fuel tax increases because we don’t view it as a tax. It is a user fee, not a tax and it hasn’t been raised in 16 years.”

He went on to say that there was a definite need for policy reforms and that we needed to know where the money was going and for what it was being spent. “There needs to be accountability,” he said and concluded his opening remarks with, “Better highways reduce pollution.”

Graves followed, opening with a comment that called attention to a critical fact, “ATA puts 40 percent of the taxes into the Highway Trust Fund and views this as an investment, not a tax.” He went on to say that the trucking association would support a new Highway bill and increased taxes, but wanted to see reforms.

He stressed the fact that freight transportation and safety needed to be given serious consideration and that congestion needed to be addressed. “We need this now, not years from now, especially the safety improvements. We have made safety recommendations that need to be passed now and not delayed.”

As a former governor, Graves understands the dynamics of state stewardship better than many and pointed out that failure to pass a new bill quickly would result in states not having the Federal funding necessary to continue many programs. The result would be that states would start acting independently and we would end up with a hodge-podge for a desperately needed integral transportation infrastructure system.

Timmons noted that a new Highway bill was a national need; that it needed to be passed so that it could start working now, not in 2011. He reminded us that manufacturing depended on the transportation infrastructure to be competitive. This is about jobs and the passage of a Highway bill translates to just that, jobs.

He pointed out that funding for the Highway Trust Fund did not have to be tied to fuel taxes exclusively and that Congress “needed to be open to all funding measures.” He stressed the need for improved performance and increased accountability and called attention to the fact that less than 10 percent of the multi-billion dollar stimulus fund went to transportation.

Transportation issues are not political and need to be addressed on a bipartisan level. Everything in this country is dependent on the overall effectiveness of our transportation infrastructure.

Marvuso said that AAA has 51 million member motorists and that the bill needed to be passed sooner rather than later. “The investment in transportation is not a luxury, it is an investment.”  She stressed the need for reforms and said AAA was “not interested in business as usual. We need reforms and we need a full comprehensive vision for transportation.”

The group felt that the reauthorization should be completed by the end of this year; that in view of the fact that so many other issues had moved to the forefront it was necessary to put this very critical issue back on the radar screen; this is a problem that will not go away and will only get worse as time passes; safety is a critical issue that needs to be addressed; passage of a new Highway bill translates to jobs, millions of jobs.

The Association of Equipment Manufacturers (AEM) joins the US Chamber of Commerce to urge Congress to focus on the very serious need to fund the highway bill (SAFETEA-LU) and to adopt Representative Jim Oberstar’s proposed three-month extension of the current highway bill rather than the Senate’s 18-month extension.

AEM, together with its colleagues at Associated Equipment Distributors, has launched an all-out effort in support of a comprehensive highway bill reauthorization. AEM commends its partners at the Chamber, the National Association of Manufacturers (NAM), AAA and the American Trucking Associations (ATA) for their action in sending an open letter to the president and to the Congress urging them to enact a multi-year surface transportation bill as soon as possible (see the attachment).

Our country simply cannot afford to wait 18 months for long-term investment that will provide comprehensive solutions to our transportation challenges and create jobs.

AEM has been a constant voice for adequate funding for roads, bridges and other surface transportation upgrades. Greater investment is needed for the US to maintain its worldwide economic leadership. Emerging powers are using our Interstate highway system as a model for advancement, as we neglect our own infrastructure improvements and risk losing our global competitive advantage.

You get what you pay for and if the US wants to be the global economic leader, it needs the best surface transportation to move goods to market.

Proper investment in surface transportation also means jobs for key manufacturing sectors. Construction equipment manufacturers have lost a significant number of jobs as some product categories are down in 2009 by 70 to 80 percent. We ask that you join your voice with AEM in supporting a short extension and adequate funding of the highway bill.

The status quo is unacceptable. We cannot have the economy we want with the transportation system we have.

An Open Letter to the President and Congress on Transportation Investment

America’s transportation users urge you to enact a multi-year surface transportation authorization bill as soon as possible. Delaying significant investment and necessary program reforms until the next Congress will not benefit our nation’s economy, safety, or quality of life. The task before the 111th Congress is to enact a robust, reformed, and more accountable multi-year transportation bill for the American people.

Our groups represent the users of the system – individuals and businesses that move on our nation’s transportation network. We are the payers of that system. And as payers we know the value that strategic capital investments provide to our national highway, bridge, and public transportation network. These public assets pay dividends to American families, businesses, and the U.S. economy and deliver a long-term value that far exceeds their initial cost.

Greater investment in transportation is needed:

We are not alone in this endeavor. Two blue ribbon, bipartisan commissions initiated by Congress in 2005 have provided a consensus plan for program change and financing. They call for a program that is performance-based, transparent, fully accountable to taxpayers, and user financed. These are principles that we embrace.

Our organizations believe Congress must address revenue shortfalls in order to finance our nation’s transportation system at robust levels and we are willing to support revenue approaches, including increases in federal gasoline and diesel taxes, in order to provide the necessary funding to meet critical transportation needs. However, because these public policy decisions directly affect our members, any request that users pay more must be accompanied by legislation that achieves program reforms, increases accountability, focuses on national objectives, and makes a commitment that spending will benefit those who make the investment. We must move away from the status quo to reach these objectives.

The undersigned organizations readily acknowledge the political challenges before you; but we firmly believe this is a challenge the 111th Congress must tackle. We will work together because the safety of our families, the strength of our economy, and the future of our transportation system depend on it.

Let’s work together to deliver this national priority.

What can you do? Call or e-mail your congressmen and senators. If contestants on America’s Got Talent or American Idol can garner tens of millions of paid-for votes in 2 hours, we should be able to swamp the White House and Congress with hundreds of millions of notes telling them to put our money where it will do us some good.