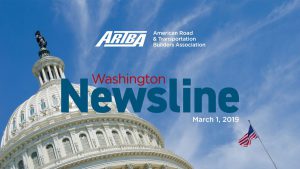 ARTBA President and CEO Dave Bauer Feb. 28 told the American Association of State Highway and Transportation Officials (AASHTO) that industry leaders and state agencies need to keep urging Congress to fix the Highway Trust Fund so that it not only is sustainable but also supports investment growth. Failure to put in place a solution to the trust funds’ permanent revenue shortfall will imperil next year’s scheduled reauthorization of the federal surface transportation programs.

“We’re trying to fix an $18 billion revenue shortfall,” Bauer said. “To shore it up we’ve used $140 billion in gimmicks and general fund transfers for the last 10 years. So this is no longer about a temporary plug to fill the Highway Trust Fund; we need to look for a long-term solution.”

In states and localities, he added, community leaders and elected officials are better positioned to tell voters what road and bridge improvements will mean to help local economies. Two such success stories in the Washington, D.C., region are the Woodrow Wilson Bridge spanning the Potomac River, and increased capacity on the interchange between Interstate 95 and Interstate 495, better known as the Beltway.

“We should be celebrating the outcome of those projects,” Bauer said. On the federal side, “there’s very little discussion about what infrastructure achieves.”

Returning “earmarks” is one tool Congress could use to garner public support for increased infrastructure spending, House Transportation & Infrastructure Committee Chairman Peter DeFazio (D-Ore.) suggested, though he did not use the word. DeFazio said “Article I projects,” named after the article of the Constitution that established the legislative branch of the federal government, will help build support for a gas tax increase needed to replenish the depleted Highway Trust Fund and support the next surface transportation bill, due next year.

“Why shouldn’t elected representatives, through a transparent process, be able to spend a small amount of money, bring it home, and show people what they’re going to get for a small increase in their gas tax?” DeFazio asked.