I can’t remember anything being talked about as much as the infrastructure since the TV show Dallas captured the country’s imagination with the ever-invasive question, “Who shot JR?”

It’s all about infrastructure… there is little doubt that the economic future of our country is based on how well we handle the current situation and how well we manage our investments into the rebuilding of our infrastructure.

The American Society of Civil Engineers (ASCE) released their 2009 Report Card for America’s Infrastructure earlier than planned (January) in order to make us more aware of how deficient our infrastructure had become and to garner support for President Obama’s stimulus plan.

Our grade was a D.

Earlier this week, ASCE unveiled the complete details of that report along with an announcement regarding the opening of its infrastructure website.

Since the last ASCE Infrastructure Report Card in 2005, we have done little or nothing to improve our grades. According to the 2009 Report Card, we have improved in only one category, going from a D to a D+. If I had brought home a report card that showed so little improvement, I would not have been able to sit for a week. No, in case you wondered, my television would not have been taken away; my report cards were in the pre-TV era.

As I re-read through the list of infrastructure problems we face, I couldn’t help but think about the Idaho legislature rejecting Governor Butch Otter’s plan to increase user fees so the state could reinvest in its infrastructure. Shortly after reading about that setback, I came across an article that listed the ten worst, or most in need, infrastructure projects in the country. Guess what? Right. Idaho was in that list of 10.

What are we going to do about the situation; wait for the government to wave its magic wand and “poof” all our problems will have vanished?

The 2009 Report Card for America’s Infrastructure grades 15 categories of infrastructure, including a new category since 2005: levees. For the second time, America’s infrastructure rates a cumulative grade of D. While not all categories fare as badly or are plagued by the same problems, delayed maintenance and chronic under funding are contributors to the low grades in nearly every category.

Read through the ASCE 2009 Report Card, and when you have finished, make sure everyone you know reads it. Decide. Are you going to sit and wait, or are you going to contact your Congressional representatives and let them know how you feel about the situation? Make sure your lawmakers have this important information when making decisions on legislation that affects infrastructure.

It’s your country and you have a right to express your opinion.

Trends In The Grades
Grades ranged from a high of C+ for solid waste to a low of D- for drinking water, inland waterways, levees, roads, and wastewater. U.S. surface transportation and aviation systems declined over the past four years, with aviation and transit dropping from a D+ to D, and roads dropping from a D to a nearly failing D-.

Just one category—energy—improved since 2005, raising its grade from D to D+.

A quick review follows. (If you want more details, see 2/10 Yo-Yo Economics blog. There, we listed the grades for each category and a brief description of what some of the problems are that influenced the grade.) 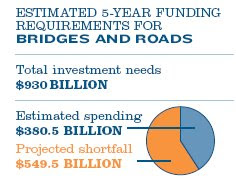 Energy
ENERGY: D+ (This is the only category that improved since last the last report card.)

Raising The Grades: Solutions
According to ASCE, the nation’s infrastructure faces some very real problems that threaten our way of life if they are not addressed. These problems are solvable if we have the needed vision and leadership. Raising the grades on our infrastructure will require that we seek and adopt a wide range of structural and non-structural solutions in every category, including technical advances, funding and regulatory changes, and changes in public behavior and support.

Raising The Grade: Case Studies
While the conditions listed in the Report Card mean low grades for all categories,
there are positive examples from across the country that demonstrate some progress is being made. Throughout the report, case studies of how public and private organizations have addressed speciﬁc problems are included to demonstrate how these innovative solutions can be applied on a larger scale. The case studies for each category may not contribute to an overall improvement of the grade, but they illustrate that the problems facing the nation’s infrastructure are solvable with some creativity and determination.

History
The concept for a report card to grade the nation’s infrastructure originated in 1988 with a congressionally
chartered commission, the National Council on Public Works Improvement. Titled Fragile Foundations: A Report on America’s Public Works, the council’s report issued recommendations on how to improve the nation’s infrastructure. As a way to guide the study, the authors used the report card concept to establish a baseline evaluation of the infrastructure. This ﬁrst report card included eight categories of infrastructure and assigned letter grades on the basis of performance and capacity of existing public works. In 1988, when the report was released, the nation’s infrastructure earned a “C,” representing an average grade. Among the problems identiﬁed within Fragile Foundations were increasing congestion and deferred maintenance and age of the system; the authors of the report worried that ﬁscal investment was inadequate to meet the current operations costs and future demands on the system. Since 1998 ASCE has released four Report Cards and found each time that these same problems persist.

Methodology
The Report Card advisory council comprises 28 engineers with expertise in the disciplines represented in the report. For nearly a year, the council worked to analyze current data and conditions within the 15 categories, consult with additional technical and industry experts and assess and assign grades.

The grade determination was based on both publicly available data and the subjective judgments of the engineers serving on the advisory council.

The 2005 Report Card featured a category called “Security” that sought to rate the ability of infrastructure to meet manmade threats. In the four years since that report, engineers have begun to look at security in the context of infrastructures overall resilience—or the ability to withstand and recover from both natural and man-made hazards. Since the likelihood of natural disaster is sometimes much higher than that of a man-made threat, and resilience must be determined on a system by system basis, the 2009 Report Card now incorporates resilience as a grading factor in each category.

The Need For Investment
In 2009, ASCE estimates that $2.2 trillion needs to be invested over ﬁve years to bring the condition of the nation’s infrastructure up to a good condition—an increase of more than half a trillion dollars since the 2005 Report Card’s estimate of $1.6 trillion. This number, adjusted for a 3% rate of inﬂation, represents capital spending at all levels of government and includes what is already being spent.

Current spending amounts to only about half of the needed investment, which means the U.S. must invest an additional $1.1 billion over the next ﬁve years.

When I am driving down the road and approach an overpass, I look at the superstructure of the bridge that’s immediately above me and have to wonder how long it will be before it comes tumbling down. I have become more aware of the cracks, eroding concrete, rust, and other deterioration. Everywhere I look I see “need.” When I think about taking a flight the AVIATION: D light starts blinking in my head. Do I really want to do this? How comfortable would I be letting a brain surgeon who passed medical school with a D remove a tumor from a critical area in my cranium? Or, would I let an eye surgeon who made it through with a D remove cataracts from my eyes?

Investing in the infrastructure is important not only because it will generate jobs, improve the economy and make us more globally competitive, it will also improve our transportation safety.

Note: Get all the facts behind the overall D grade announced by ASCE in January. The complete 2009 Report Card for America’s Infrastructure is now available, detailing the rationale behind the grades in 15 categories, with the guidance from professional engineers that helped determine the grades. Visit the upgraded Report Card site for detailed yet easily accessible analysis of each category. We have posted a separate listing of ASCE’s assessment of how each state’s infrastructure measures up. Click here to get your state’s statistics.