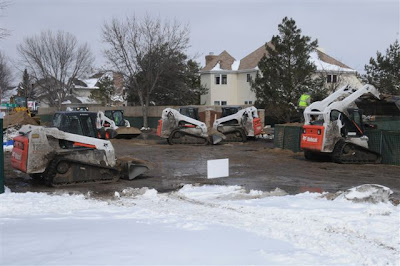 The Red River in North Dakota crested at 39.93 feet today at 2:15 pm, lower than its Saturday level of 40.82 feet, and is expected to stay below 41 feet and slowly drop over the next three to seven days, according to the National Weather Service. Is the worst over? Only God knows the answer to that question. The residents in the area are still fighting to salvage as much as they can and to keep the floodwaters from annihilating their homes, churches, schools and everything else they have spent a lifetime developing.

Mark Bittner, the Fargo city engineer, said HESCO barriers have failed twice and probably wouldn’t be able to withstand water at any significant height.
“As far as a long-lasting flood-protection device, you have to be prepared to address seepage and reinforce them from behind,” Bittner said.

HESCO barriers were originally designed as blast walls that could be quickly assembled in military zones. They are gabions (i.e. wire cages), lined with mesh that hold compacted sand. They assemble quickly and can be used for a variety of applications requiring barriers. A typical wall of HESCO Concertainer units — equivalent to approximately 1500 sandbags — can be erected and installed by two people, using a standard front loader, in just 20 minutes. A similar sandbag wall would take ten workers roughly seven hours to erect. Even if they are leaking, where would Fargo be without them?

I guess if I thought I could help, I would have been on my way to Fargo a couple of days ago.

When a situation like this occurs I think about all the many times such incidents do challenge us. In recent times, there have been earthquakes, tsunamis, hurricanes, tornadoes, floods, plane crashes, train wrecks and accidents, not to mention those deliberately caused by people, like 9-11.

As far as we have come scientifically, technologically and intellectually, we still cannot triumph over the forces of nature. Every flood, hurricane, tornado or the like should humble us and remind us that we are not in control. 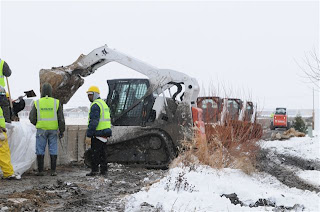 Friday, after posting the informa- tion on the flooding in the Fargo area, I e-mailed a friend who lives there and works at Bobcat. He took the time to answer and I thought his comments were worth sharing with you. I wanted to make sure it was ok with him, so I sent him a follow-up letting him know my plans. His response was, “That would be fine.”

So far, so good here in “river city”. As I write, there are military Blackhawk helicopters flying over my house, inspecting the river. The crest appears to have hit (at 40.8 feet) this morning, but we’ll be at this flood stage for most of a week. Schools will remain closed for another week, as some are being used as evacuation shelters, and it’s really not safe until the river drops down again.

Quite an amazing volunteer effort that has gone on here, and now we have some 1700 National Guard troops assisting. One guardsman said, “Finally, we’re doing what we’re supposed to be doing.” 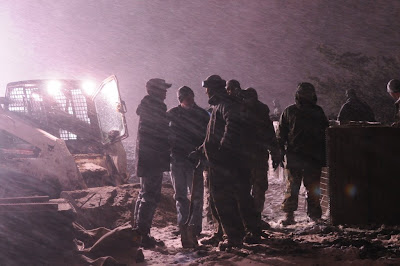 I worked along many of the guardsmen making sandbags, and most Bobcat employees have been assisting in one way or another. The Guardsmen showed great attitudes, even after working 10-12 hour days for about seven days straight (for those who arrived last weekend). In the city’s “sandbag central” and the Fargodome, volunteers made some 3 million sandbags in the past six-seven days. Since my back won’t allow me to sling sandbags at the dike building sites, making up the bags is something I can do.

There are about 40 miles of temporary dikes (some on top of permanent levees) protecting the two cities, if you can imagine that.

Ernie (our retired company photographer) has been back “on the job” taking pictures of our Bobcat people (and machines) at work. The attached photos show the working conditions on early Wednesday morning, when our guys assisted the Guard in building a HESCO dike near the Fargo Country Club. The group photo (you know Ernie) shows our guys with the Guardsmen. 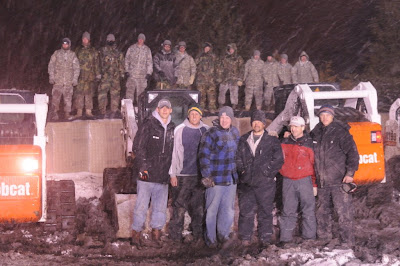 The photo of the street sign is at the end of my block. The area on the other side of the HESCO dike was evacuated the night before last, so those houses are mostly empty now. None are flooded out, but they’re considered “at risk” if the sandbag or clay dikes would fail. 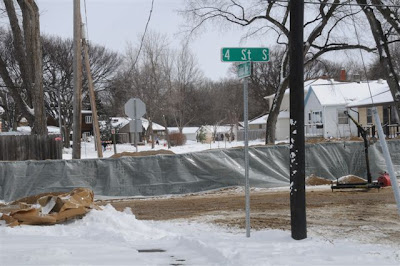 He shared some additional information with me and sent links to a site that is loaded with flood photos and another that is a link to the Fargo Forum with extensive flood coverage.

Here are some interesting shots of the HESCO construction. In this case, they stacked them two high, so they place two back to back, then another on top. 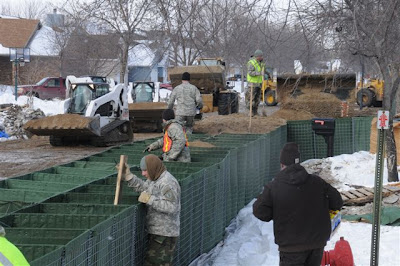 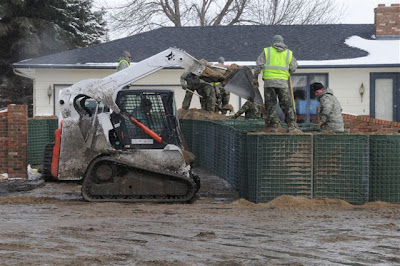 The other two shots show how the sandbags were stored in neighborhood garages, to keep the bags from freezing until they were needed. 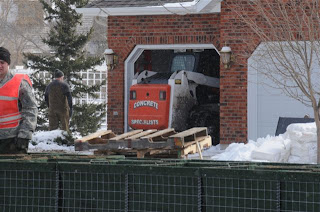 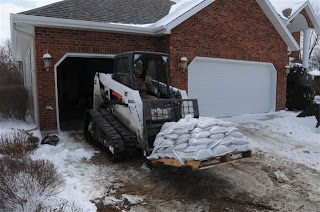 What more can I say…