Researchers at The University of Maine’s Advanced Structures and Composites Center have developed a way to build municipal bridges faster, cheaper and without steel. University, state and local officials, recognized these dramatic advancements in bridge construction technology at a recent ceremony honoring the achievement. 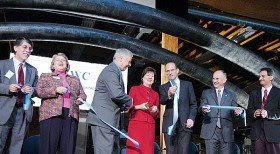 The technology is a rigid, inflatable arch that can be used to erect and reinforce bridges, temporary shelters and other storage facilities. The researchers say this technology could revolutionize at least one part of the construction industry.

Habib Dagher, director of UMaine’s Advanced Structures and Composites Center said during an interview with Maine Public Broadcasting Network, “We call it the Bridge in A Backpack. And actually right above my head is a 36-foot arch, there’s two arches that are an actual replicate of a bridge we built in Pittsfield, Maine with the Maine Department of Transportation.”

He added that the arch-shaped tube, made of composite materials such as plastic and fiberglass, can be molded into a desired shape and moved easily. The result is an arch that’s much more durable and longer lasting than conventional ones made with steel or concrete. 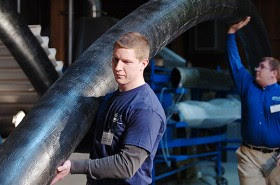 During the Maine PBN interview, Dagher demonstrated how the technology worked. “I am currently carrying a 36-foot arch for a bridge. I’m going to take it out of the backpack so you can see it. It arrives at the site rolled up and you essentially inflate it at the site, then you put it over a mold. And then you infuse it with the resin, and overnight it becomes twice the strength of steel. And then, while in place, you fill it full of concrete,” he said.

The Bridge in a Backpack technology — so called because of its light weight and the portability of its components — uses collapsible carbon-fiber tubes that are inflated, shaped into arches and infused with resin before being moved into place. The tubes are then filled with concrete, producing arches that are harder than steel, yet resistant to corrosion.

Finally, the arches — 23 of them in the case of the Neal Bridge — are overlaid with a fiber-reinforced decking and buried under several feet of dirt and sand. The result, according to engineers, is a normal-looking bridge that goes up faster, costs the same or less than a traditional span but should last longer.

Since 2001, the Advanced Structures and Composites Center has received more than $17 million in research funding from government agencies, including the Federal Highway Administration, the National Science Foundation and the Maine Technology Institute. The Bridge in a Backpack is just one of its endeavors.

“The timimg’s very favorable for us to begin the introduction and commercialization of this methodology,” said Bangor native Brit Svoboda, one of the investors in AIT. “We know between the advancement of technology, [including] the elimination of steel, the ease of assembly, distribution and installation, coupled with an exciting stimulus package with things in there for infrastructure and bridge building, make this the perfect time to roll this company out.”

“It seems that every day brings bad economic news. How wonderful it is to celebrate innovation, hard work and good economic news, including new jobs,” says U.S. Senator Susan Collins, who, along with colleagues Senator Olympia Snowe (Note: Collins and Snowe were two of the three Republican Senators who supported the stimulus bill) and Congressman Mike Michaud, secured federal funding for the Bridge in a Backpack research and development. “But what most excites me is the partnership with the private sector. Because it is, after all, the goal of this R & D, to commercialize it, to see it creating spinoff companies and creating great jobs right here in Maine.”

Officials estimated the new endeavor could create about 100 new jobs and lead to at least six new bridges in Maine over the next several years. “This is a milestone because of how exciting this technology is,” Habib Dagher said earlier. “It has the potential to change everything in terms of bridge construction. It can change the way bridges are built in the future.”

Rep. Michaud says the project is exciting because it will make it faster and less costly to construct much-needed bridges around the state, and, if the structures catch on, around the country. “This new technology will not only last longer, but it will also save time. It will not only provide our state with more options for building bridges, but it also will help save money in the process.” The Advanced Structures and Composites Center has done research and development, or R & D, work for over 150 private companies, and employs more than 144 students and faculty at UMaine.

Maine Governor John Baldacci praised the collaboration between the University and the Maine Department of Transportation. “The Maine Department of Transportation has been working with the University and has committed at least $6 million to build at least six additional composite material bridges in Maine, as well as a 500-foot-long HC Beam bridge this summer in Boothbay.” The HC Beam is another prototype that underwent extensive testing at the Advanced Structures and Composites Center. That technology has become commercial thanks to another business, HarborTechnologies, in Brunswick.

Last year, HC Bridge Co. built a bridge in Lockport, Ill., using the composite girders manufactured by Harbor Technologies, whose president, Martin Grimnes, is a UMaine alumnus. The companies are now working together on other projects, including the Boothbay span, and Hillman said he sees no reason why the emerging technology couldn’t spread across the country. Grimnes said the composite technology being developed in UMaine labs also has great potential to revolutionize the wind-energy industry, which in turn can help lower the nation’s “carbon footprint.”