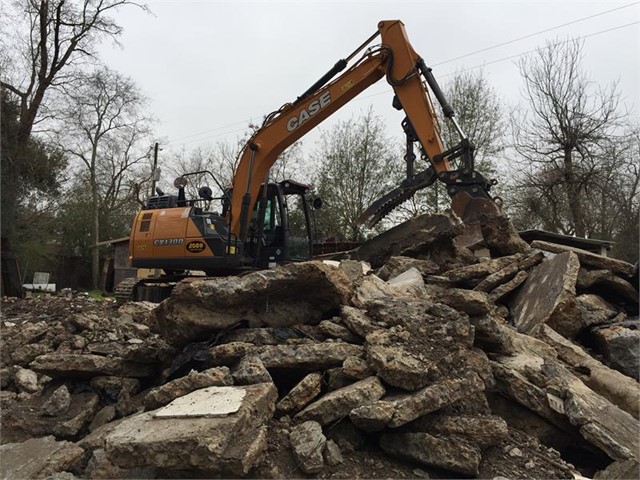 CASE Construction Equipment dealer ASCO, Lubbock, Texas recently provided a TR310 compact track loader and CX130D excavator to disaster recovery nonprofits Team Rubicon and project leader SBP. The equipment was used for demolition work before SBP could rebuild a Houston home that first was burnt to the ground then flooded during Hurricane Harvey.
Asha Ramraj and her husband first purchased the home in 2002. Together with their children, the Ramraj’s worked on making it a home. Years later, in 2015 the home burned to the ground, leaving only the laundry room intact. Ramraj’s husband passed away shortly after, leaving her alone to shoulder the burden of rebuilding while she lived in what remained of her home. Then in 2017, what was left of the Ramraj’s home was flooded during Hurricane Harvey.
“CASE Construction and ASCO were eager to work with Team Rubicon to support SBP in helping get this home rebuild off to a good start in any way we could,” said Michel Marchand, vice president – North America, CASE Construction Equipment. “The resiliency of Ms. Ramraj in the face of continued hardship is truly incredible, and ASCO was ready to help immediately.”
Team Rubicon collaborated with SBP, another disaster recovery nonprofit, with the demolition of the home, which would have set back SBP’s budget considerably. SBP plans to complete construction of the home in the coming months.
“Here was this insanely resilient woman who had been through so much,” said Cli Roberts, executive director of SBP’s Houston operation. “We desperately wanted to help her get her home back. I don’t know how we would have could have done it without help from Team Rubicon, CASE and ASCO.”
For more information or to donate to Team Rubicon, visit TeamRubiconUSA.org. For more information on the partnership between CASE and Team Rubicon, visit CaseCE.com/TeamRubicon.