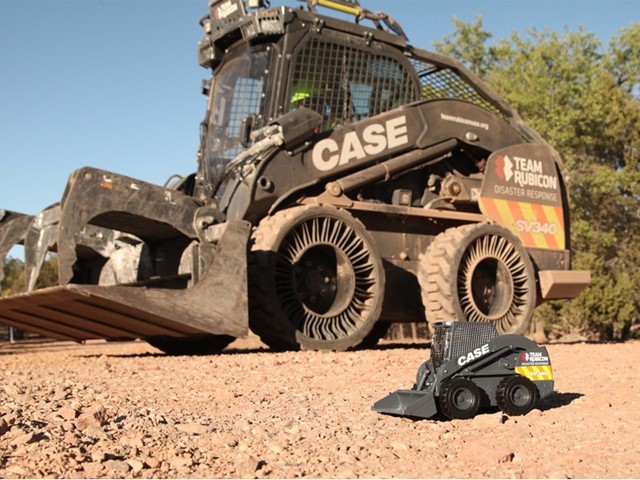 Introduced for the first time at ConExpo/Con-Agg 2017, the CASE/Team Rubicon SV340 disaster response skid steer has responded to numerous disasters throughout the country – including Hurricane Harvey recovery and recent wildfire cleanup out west, as well as service projects in states such as Ohio, Michigan and Wisconsin.
A portion of the proceeds from each model purchase will aid TR’s mission and efforts. The limited-edition model can be purchased through the CASE website (text link: http://bit.ly/CASEMODEL).
Team Rubicon unites the skills and experiences of military veterans with first responders to rapidly deploy emergency response teams. The organization is comprised of more than 80,000 volunteers and has responded to over 275 disasters across the world since 2010. CASE provides Team Rubicon with equipment for disaster response, community service and training events throughout the country as part of a partnership that kicked off in 2015.
“A great deal of the heritage of the construction industry is told through die cast models collected through the years,” says Mike Marchand, vice president – North America, CASE Construction Equipment. “This model ensures that this partnership and the great work achieved in community improvement and skills training of our veterans will be honored and remembered.”
To donate to Team Rubicon’s relief efforts, visit TeamRubiconUSA.org. For more on the partnership between Team Rubicon and CASE, visit CaseCE.com/TeamRubicon.
For more on Team Rubicon visit:
http://www.site-kconstructionzone.com/?s=Team+Rubicon