companies have signed an alliance agreement. The agreement between the parties is for the design,

manufacture, sale and support of Caterpillar mini hydraulic excavators in the under three-ton category.

The alliance agreement calls for Wacker Neuson to leverage its manufacturing and product development capability to produce Caterpillar mini hydraulic excavators in the under three-ton category at its production plant in Linz, Austria. Caterpillar currently offers three models in this size range. The machines will be produced to Caterpillar’s specifications and will be distributed and 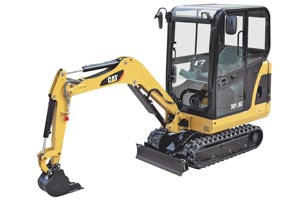 supported via Caterpillar’s global dealer network, with the exception of Japan. All Caterpillar models will be clearly differentiated from comparable Wacker Neuson models in the same product range.

“We know many customers are looking for more options in this size range, and this alliance will give those customers expanded choices to help them grow their business,” said Mary Bell, Caterpillar vice president with responsibility for the Building Construction Products Division. “There is also an ideal cultural fit between Caterpillar and Wacker Neuson, as both companies have a strong focus on developing and supporting world class products. Over the years, Wacker Neuson has developed a strong reputation among our Caterpillar dealers, who have become familiar with Wacker Neuson’s Light Equipment products, which are available at Cat Rental stores,” Bell added.

By concentrating production of select products at Wacker Neuson locations, the two companies will leverage joint economies of scale in the manufacturing process while supplying their respective, complementary sales channels with differentiated, competitive machines.

“We are delighted at the prospect of what promises to be a strategic partnership for both companies as we move forward,” explained Dr. Ing. Georg Sick, CEO of Wacker Neuson SE.