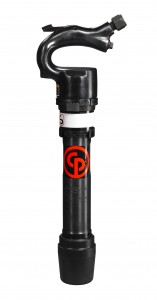 Chicago Pneumatic CP 4608 and CP 4611 Rivet Busters are designed to offer precise control through a high power-to-weight ratio and a teasing throttle for progressive hitting frequency. The teasing throttle feature is part of a Controlled Power System (CPS) that is designed to prevent blank firing when a unit’s rubber bumper is 75-percent worn. At that point the outward movement of the rivet buster’s upper and lower sleeves opens bleeding ports for air, causing the piston to stop in its lower position as air is exhausted above the tool retainer.

Originally designed for removing rivets and various other metal applications, the CP 4608 and CP 4611 Rivet Busters are also used for concrete demolition and bridge work, since they are said to have approximately the same hitting power as a 60 lb (30 kg) breaker for half its weight.

The Chicago Pneumatic Rivet Busters are available in choice of cylinders. The CP 4608 features an 8-inch cylinder with 1080 bpm and the CP 4611 has an 11-inch cylinder, 720 bpm. The Boyer valve and the long piston stroke is designed to deliver the power needed on most jobs. A stepped cylinder configuration is designed to prevent accidental ejection of the hardened steel piston from the cylinder.

CP Rivet Busters come with a choice of forged steel handle. There is an open grip handle with outside trigger or a D-shaped handle with inside-the-handle trigger.

Typical applications for the CP Rivet Busters include bridge deck work where he weight of breakers is restricted, de-capping 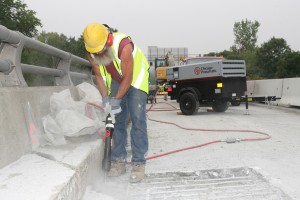 foundation pillars where concrete is very hard, demolition of medium- to hard-concrete, or as an alternative to paving breakers where high hitting power is needed but the work space is limited or the task calls for working horizontally.