The Less of the Best

It’s good to be right, but its really good when’s it’s about Auburn being overrated. Oh come on, my crimson blood hasn’t shown through too much so far. Auburn’s loss, as I called it, was predictable. But there’s more to this; the media loves unbeatens,

regardless of whom they’ve gone unbeaten against. Auburn is still the same team the media said was average at the beginning of the season, why are they top-25 worthy now? They went unbeaten against teams with a combined record of 10 – 17; to me that doesn’t warrant a ranking or hype. Auburn is a decent team and they should’ve beaten the teams they did but they’re right where I thought they’d be. I’m not picking on only the

Tigers, there are definitely others as well. Michigan probably got a little too much love too quick, and Notre Dame’s ranking is a joke. We’ll see whether Notre Dame deserves it’s current ranking this week, but as of now I can’t see anything they’ve done to deserve it. Notre Dame’s offense is very good; Jimmy Clausen may be playing the quarterback position better than anyone in the nation right now. But their defense is terrible, specifically the secondary and line. Penn State was vastly overrated at the beginning of the season, but I can’t understand why they still are. The only ranked team they’ve played, Iowa, dominated them. Their offense was shut down pure and simple. Their defense has played good, but it needs to play great until their offense can get it together. They’ve only beaten two opponents with winning records, Temple (3-2) and Eastern Illinois (4-2), members of the Football Championship Subdivision, formerly known as Division 1- AA.

The Best of the Best

Alabama is now the #2 team in the nation and if they keep it up, it looks like they’ll stay there until their inevitable Dec 5 meeting with #1 Florida. If this #1, #2 match-up pans out, it will be the second year in a row the SEC championship has been a de facto

semifinal for the National Title Game. Florida faced their toughest challenge last week against LSU, and they’ll likely be favored in every game, the rest of the regular season, by at least two touchdowns. South Carolina is their biggest threat and how monumental would it be if Spurrier could foil Florida’s SEC championship and NC dreams? Alabama still has South Carolina, LSU and recently rejuvenated Tennessee all in a row, but the Tide

has more than impressed so far and they should get through this stretch unscathed. Texas’s schedule isn’t much easier with the Red River Rivalry coming up next week and a tricky road stretch against Missouri and Oklahoma State following. They have Kansas at home but I’m not sure that’ll be much of a test. Any slip up and Texas’s NC hopes will be seriously diminished. If USC and VT finish out the season unbeaten it’ll be all up to the computers. Predicting that isn’t an exact science either, but my vote goes to a one-loss VT team. With Cincinnati and Iowa’s week schedules they could go undefeated and still not top any of the one-loss big shots. It sucks and it’s not right but that’s the BCS, just ask any Auburn fan. An undefeated TCU won’t get the NC bid either. Ask any Utah fan about the BCS and see what they think. And if TCU and Boise State both go undefeated Boise won’t even make a BCS game. This might actually be a good thing. The more controversy the better; I don’t see the NCAA changing the current bowl system anytime soon, but something will happen sometime. 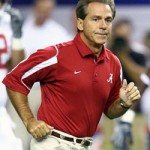 “I think if we had a plus-one system where we used the current bowl system to pick the top four teams — maybe eight, but let’s just say four — it would eliminate some of the controversy. Auburn got left out [in 2004]; USC got left out when we won the national championship at LSU [in 2003]. Somebody always gets left out. But four teams, you would get it right. Use two of the BCS bowls each year to play two of the games and a week or 10 days later have a national championship. I think that would keep a lot more people in the mix right down toward the end of the season. There could be 10 or 12 teams that might be able to get into the top four, depending on what may happen. It would create a lot of interest and a lot of excitement.”

I tend to agree, Nick.

The Mess of the Rest

Georgia’s about as hard to understand as quantum physics. A year and six weeks ago, Georgia was the best in the land, “numero uno.” Now Richt’s boys are 3-3, (2-2) in the SEC and off to their worst start since ’96. We knew their offense might struggle with

the losses of #1 overall pick Matthew Stafford and fellow first rounder Knowshon Moreno. But no one expected their defense to be this bad. They rank 100 nationally in scoring defense giving up 30.7 ppg, and rank 74 in total defense giving up 377.2 ypg. Their 2008 rankings weren’t nearly this bad with season ending rankings of 58 (24.5 ppg) and 22 (312.0 ypg) respectively. Florida State isn’t exactly elementary stuff either. Their trouncing of BYU at Levell Edwards Stadium was impressive, but everything else has been dreadful. Their defense has been blitzed by much worse offenses than BYU’s, and their offense has struggled against much worse defenses than BYU’s. I guess I should forget that game but no matter how you look at it, it doesn’t make sense. Bobby Bowden’s looming

retirement may have something to do with the sporadic play of the Seminole’s. And I can’t blame them; distractions are distractions no matter how much you try to block them out. In case no one knew, the “anemic spasm” I referred to last week was Tennessee’s Jonathon Crompton. Just how bad is Georgia’s defense? Well the anemic spasm was 20 of 27, for 310 yards and 4 TDs. Now maybe it’s a combination of Crompton’s maturation and Tennessee’s line finally giving him some time to throw. But even against Ohio he was 17 of 34, for 222 yards 2 TDs and a pick. Against good defenses like UCLA and Florida he went a combined 24 of 45, for 186 yards no TDs and 5 picks. I’m telling you, Georgia’s just that bad. Crompton may have some confidence after the win but I’m not sure he’ll be so confident in the film room watching Alabama’s defense maul QB after QB. Tennessee needed this bye week and if they want any chance two weeks from now in Tuscaloosa they’ll use it wisely.