“Key input prices fell or were flat in all but one category in July and further downward pressure on input costs is likely to be reflected in next month’s report.” —ABC Chief Economist Anirban Basu. 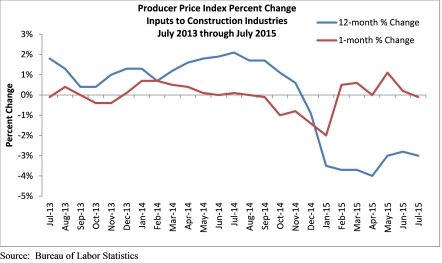 Prices for inputs to construction industries declined 0.1 percent in July after increasing 0.2 percent in June, according to the Aug. 14 producer price index release by the Bureau of Labor Statistics. Year-over-year prices were down 3 percent in July and have been down on an annual basis for each of the past eight months. Prices of inputs to nonresidential construction industries declined 0.3 percent on a monthly basis and are down 3.9 percent on a yearly basis.

“Key input prices fell or were flat in all but one category in July and it is important to note that further downward pressure on input costs is likely to be reflected in next month’s report, as well,” said Associated Builders and Contractors Chief Economist Anirban Basu.

“The state of affairs today is unprecedented,” said Basu. “Nonresidential construction spending has been recovering robustly in the U.S. in recent months—up more than 11 percent on a year-over-year basis. On top of that, the multifamily building boom continues in most major U.S. metropolitan areas.

“All things being equal, these circumstances should correspond with rising construction materials prices,” said Basu. “But as a reflection of how global the economy has become, America’s nonresidential construction recovery is taking place in the context of collapsing commodity prices. The latest round of commodity price decreases has been spawned by softening growth in China and ongoing increases in production of key inputs worldwide, including oil. However, this form of deflation should not be troubling to contractors. If anything, it will tend to boost profit margins for the average contractor, though falling commodity prices do not represent good news for construction firms heavily invested in oil and natural gas segments. These falling prices also imply slower increases in interest rates going forward, which will help extend the ongoing nonresidential construction recovery.”

Below are the key input prices for the month and the year.